The GE76 Raider (11UF-053) is the flagship MSI model from the upcoming series. This laptop features up to Intel Core i9-11980HK processors which is the only unlocked 8-core SKU in the series. According to various retailer listings, it appears that this laptop will be equipped with GeForce RTX 3080 Laptop GPU. The GE76 Raider is a refreshed 17.3 inch model from MSI that was initially launched in January with the 10th Gen Core Comet Lake-H series. Judging from the pricing from two retailers, this laptop will cost up to 3299 USD.

MSI is also launching GS76 Stealth and GS66 Stealth with the 11th Gen Core Intel series. Those thinner design laptops will feature up to Core i9-11900H CPU, but options with i7-11800H are also available. Both are 8-core processors that basically feature different clock speeds. All models listed by XoticPC feature GeForce RTX 3080 GPU with pricing varying from 2799 USD to 3099 USD. The retailer has an option to modify each laptop with higher capacity SSD drives (now thanks to Tiger Lake-H with Gen4 support) and faster memory. 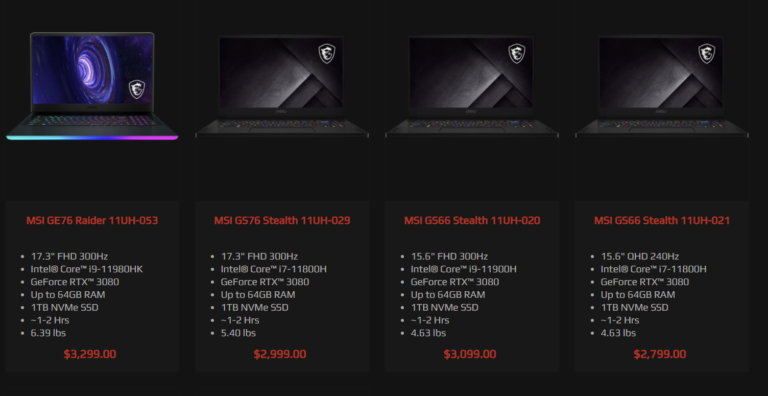 Meanwhile, other retailers such as ExcaliburPC offers GE76 Raider laptops with different configurations. Unlike Stealth, this is a heavier and more gaming-oriented laptop series. That said, MSI is offering up to GeForce RTX 3080 Max Performance (Max-P).

Some retailers list the full specs of the new Core series. According to those specs, Intel Core i9-11980HK will have a base clock of 2.6 GHz and boost up to 5.0 GHz. The retailer lists 65W TDP, which is a special mode for this unlocked SKU. The i7-11800H is a standard 45W gaming CPU with a base clock of 2.4 GHz and boosts up to 4.6 GHz. Both models are 8-core and offer hyperthreading.