A screenshot from CPU-Z tool shows 64GB of DDR5 memory clocked at 3202.7 MHz (6400 MT/s) with a CAS Latency of 32 clocks. The screenshot alone does not confirm whether this is Intel Alder Lake/Raptor Lake or AMD platform, but the title associated with the posted screenshot does.

Since AMD currently does not have any desktop system that would allow DDR5 memory to be used, this is undoubtedly the upcoming Ryzen 7000 CPU codenamed Raphael based on Zen4 microarchitecture. 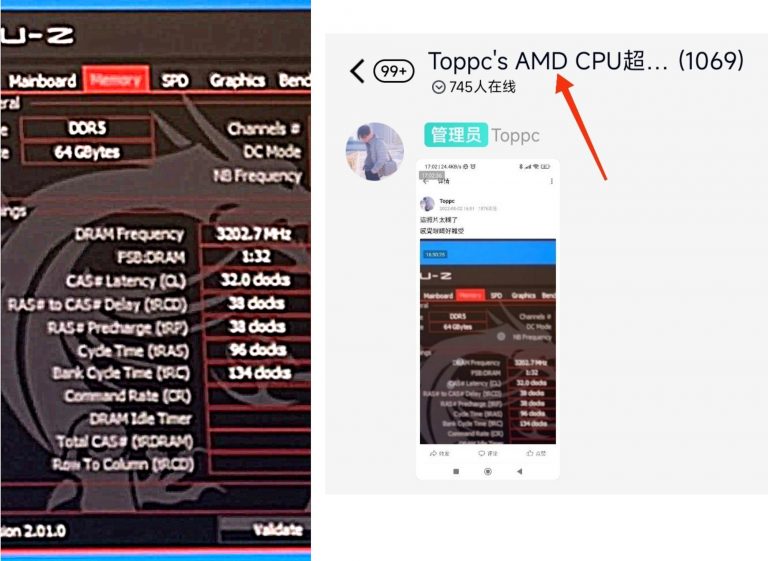 Both the Ryzen 7000 series and Intel 13th Gen Core “Raptor Lake” are to support DDR5-5600 memory out of the box. That is an increased speed over Alder Lake’s official support for 4800 MT/s modules. Of course, those platforms support faster-overclocked memory, either through Intel XMP 3.0 memory profiles, AMD EXPO technology (confirmed by MSI) or manual overclocking.

It is unclear what type of memory was used by Toppc, but it is 400 MHz higher than the default supported memory. The flagship MSI X670E motherboard officially supports DDR5-5600 memory and is faster through overclocking.

According to the rumors, AMD is set to launch Ryzen 7000 series in September, but we should see more details on X670E motherboards this week (August 4th) during the official showcase during AMD Meet the Expert event.