AMD B650 motherboards in development

The first evidence of AMD’s next-gen B650 motherboard has been discovered by @9550pro.

The alleged screenshot shows MSI MAG B650 motherboard running AMD Eng(ineering Sample). This would suggest that AMD is already developing a B650 mid-range motherboard series, and there probably shouldn’t be a delay after the introduction of the high-end X670 (or X690) series as well.

The B650 should not be confused with Intel B660 series, which are mid-range LGA1700 motherboards for Alder Lake and Raptor Lake processors. AMD’s B650 will be part of the entirely new AM5 (LGA1718) platform for Ryzen 7000 processors, codenamed “Raphael”. With that in mind, one should assume that the engineering sample shown here is such a Zen4 processor: 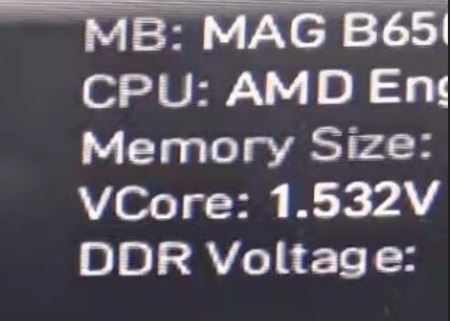 What is worth noticing is the high VCore of 1.532V. It is not clear if this is a bug or somebody is already testing overclocking potential of the next-gen series, but given how limited are such early samples are in terms of clocks and overclocking capabilities, this voltage does not necessarily mean much.

AMD Raphael processors will be first desktop S-Series with built-in Radeon graphics. These 5 nm processors are expected to feature up to 16 Zen4 cores and support entirely new DDR5 memory. The Ryzen 7000 series will launch by the end of this year.