A quick follow-up to our story from yesterday, where the first pics of the unreleased GeForce RTX 3090 SUPER and RTX 3080 20GB were shared.

As GPU mining is almost over for classic Ethereum, mining farms are now forced to either switch to alternative cryptocurrencies or sell their equipment in volume. As it turns out, some of these farms had access to unreleased GPUs, such as the RTX 3080 20GB.

New photos featuring MSI GeForce RTX 3080 Ventus 3X OC model with 20GB has now been shared on social media. This card should not be confused with RTX 3080 Ti 20GB, a card that somehow ended up on the Russian market last year.

During the peak of COVID pandemic, NVIDIA was debating multiple RTX 3080/3090 models to the point where board partners began producing three different models for RTX 3080: 10GB, 12GB and 20GB, and that’s not even including LHR models. As we know, only 10GB and 12GB models ever made it to market. Or so did we think.

The card pictured still has display connector plugs, which were not needed for mining. And speaking of mining, in ETHASH these cards reached 97.48 MH/s hashrate, meaning they had no Lite Hash Rate crypto block enabled. The fact that they ended up in miners hands, just confirms that MSI was selling GPUs directly to miners while normal buyers and gamers still had to deal with LHR. 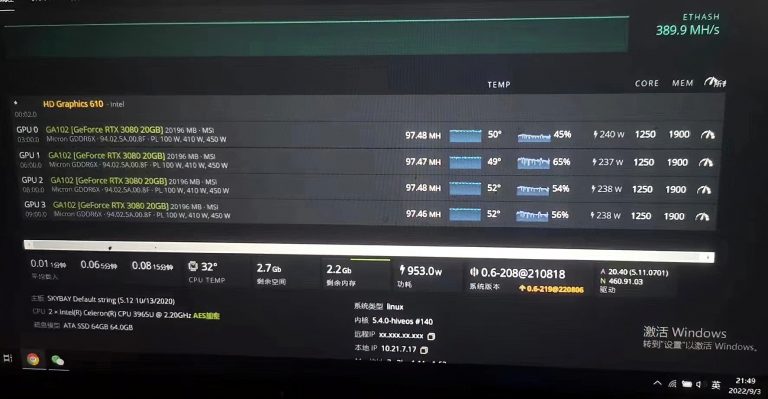 Obviously, it makes no sense to buy these cards right now: ETH mining will be technically over later this month and NVIDIA is just about to announce their next-gen GPUs. Not to mention that there are no official drivers for these cards either, so they only work in mining, not gaming.