It looks like MSI ready to launch its RTX 3080 Ti graphics card.

Just two weeks ago we reported that MSI preparing RTX 3080 Ti Ventus 3X graphics cards. The manufacturer is more than ready to launch its new graphic cards, those cards are already shipping worldwide to distribution centers. The previous leak revealed that Ventus cards were being shipped to Los Angeles headquarters, the new leak also points towards a product that is ready for retail. Our source has told us that the photo is from a distribution center, but no further details were provided. 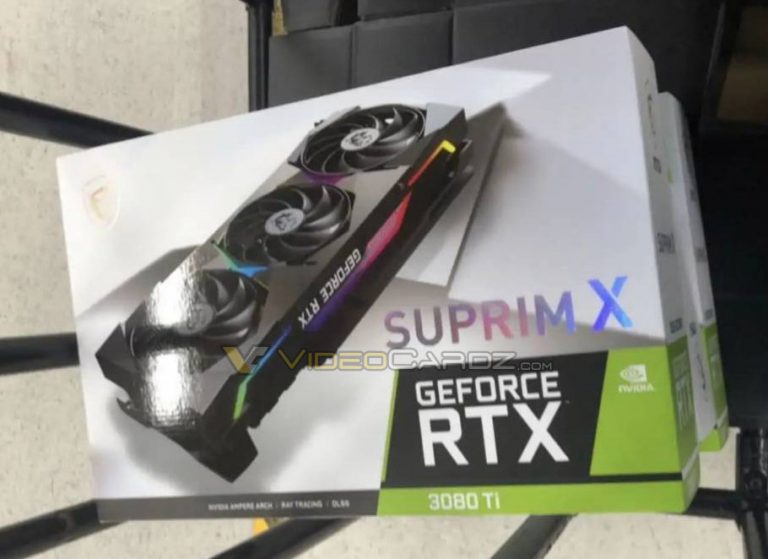 MSI SUPRIM X is the flagship model from the manufacturers’ series. These cards offer the best performance and best quality materials. Unlike the GAMING TRIO series which debuted in September 2020, the SURIM models feature a full metal backplate. MSI GAMING series was prone to backplate cracking because they were poorly designed and made of plastic.

NVIDIA GeForce RTX 3080 Ti is a new high-end graphics card that should offer performance comparable to RTX 3090. However, unlike the flagship 1,499 USD graphics card, this model will feature half of the memory – it ships with 12GB GDDR6X 384-bit memory. A big reduction in memory capacity and a slight decrease in CUDA core count (10240) will definitely provide an interesting option, should the pricing of graphics cards stabilize, of course.

The RTX 3080 Ti should be announced on May 18th with a release date planned for May 26th (both dates were not confirmed). This SKU will launch at the same time as NVIDIA is refreshing its while RTX 30 lineup with Lite Hash Rate series. This model, along with the LHR series will all feature crypto mining hash rate limiter as well as ResizableBAR.

Many thanks to Alexey for the photo!