MSI focusing on Radeon RX 6000 GAMING series only, other series currently not planned due to lack of Navi 21 GPU supply

Unlike other manufacturers who confirmed to offer up to 4 SKUs per a single Radeon RX 6000 model, MSI decided to focus on one design entirely. The company announced that during the MSI Insider show which was featuring Radeon RX 6800 XT GAMING X TRIO graphics card.

The manufacturer publicly confirmed it will focus on the GAMING series only. That means only four SKUs are currently planned, including factory-overclocked models known as Gaming X Trio and cards featuring clocks closer to stock known as Gaming Trio.

So this is our Gaming card, this is Gaming X Trio, and like we have already talked to you before, maybe you’ve missed it, we are only going to focus on this [design]. So we didn’t plan any other SKUs, meaning blower type fan design or SUPRIM […] because we don’t get enough supply. And it’s then better to only focus on one SKU [but] in the future, we will see.
— Eric Van Beurden, MSI

The RX 6800 GAMING series have been showcased during the stream. The graphics card has been used for a short Cyberpunk 2077 gameplay and later disassembled to show the internal design. You can see more photos of the card here. 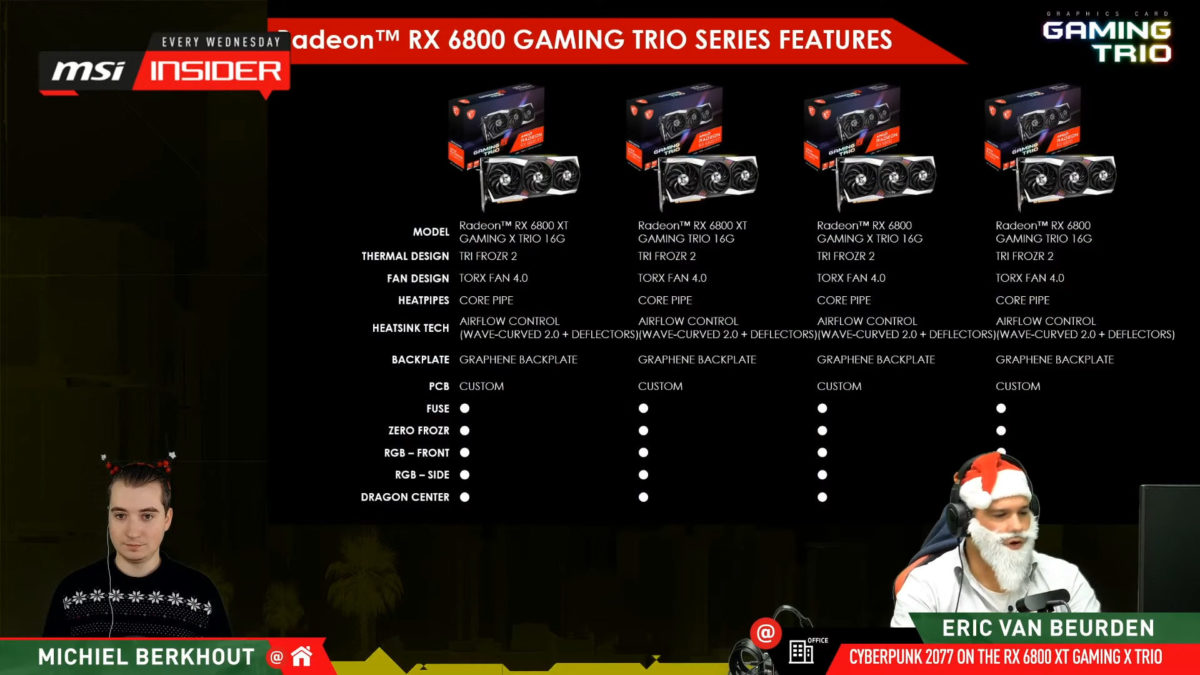 No supply from AMD and board partners

Despite almost a month passing since the launch of Radeon RX 6800 cards, the supply of graphics cards is still non-existent. AMD clearly failed to communicate the situation to the community and has left potential customers without any official information on Navi 21 restocking. The supply of Navi 21 so bad, that if we were to call the NVIDIA RTX 30 release a paper launch, then the RX 6800 launch was still in a ‘cellulose’ state.

AMD recently confirmed it will continue to make reference cards, which is good news since this might be a chance to actually these cards at an advertised price. Custom designs are easily 100-150 USD more expensive, greatly affecting the price to performance ratio.