Soldiers, prepare to extract money from your wallet. 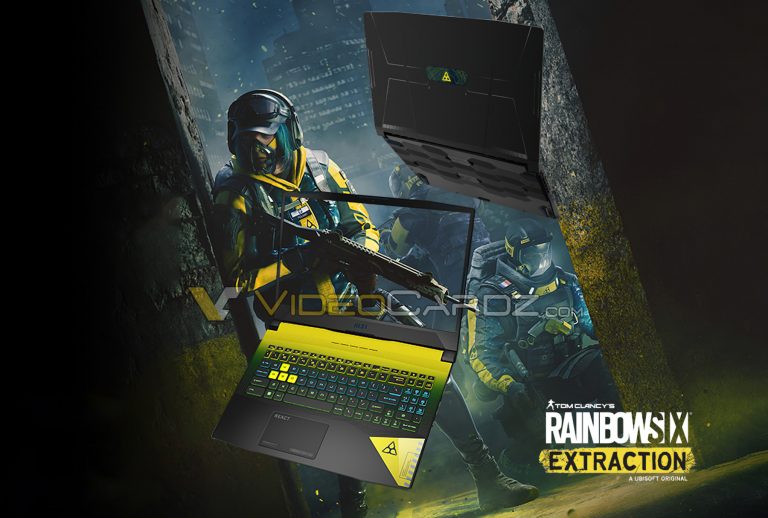 MSI has teamed up with Ubisoft to launch a new gaming laptop called Crosshair 15/17. The 15-inch version will also be available with a custom color scheme borrowed from the upcoming Rainbow Six Extraction game set to launch in January.

The laptop will be based on Intel 12th Gen Core CPU and NVIDIA’s latest RTX 30 Ti GPU. The specifications do not list the top Core i9 SKU being used by this laptop, but one would assume its Core i9-12900H(K), however, variants with Core i7-12700H/12800H CPUs are also to be expected.

Crosshair 15  will be offered with up to GeForce RTX 3070 Ti, which is the latest addition to the NVIDIA high-end segment. Unfortunately, the spec sheet does not mention CUDA core count or TGP, but at least it is confirmed to be an 8GB GDDR6 part.

The Crosshair GL series is a collaboration between MSI and Ubisoft. The series features a futuristic design with exclusive sci-fi elements inspired by the feeling and mood of gameplay, and the comes equipped with Intel® Core i9 processors and Cooler Boost 5 Technology. The graphic performance is at a maximized level – setting the Crosshair series apart from its competition . Crosshair GL Series comes in three variants: Crosshair 15, Crosshair 17, and also the limited edition Crosshair 15 Rainbow Six Extraction Edition that comes with an exclusive bundle pack.

MSI Crosshair 15 Rainbow Six Extraction Edition will be officially presented by MSI during CES 2022, shortly after Intel and NVIDIA formally introduce their latest laptop hardware. The special edition will be bundled with the game, gaming mouse, and mousepad.