MSI to talk about Rocket Lake

On March 30th Intel will officially launch its 11th Gen Core S-Series of processors. Board partners and customers have been waiting for this launch since January, ever since Intel launched its 500-series motherboards.

MSI has announced it will have a special event in collaboration with Intel “MSI X Intel Launch Event 2021: Launching to New Heights”. It will take place on March 31 and it is likely to focus on MSI’s 500 series motherboards as well as Intel Core CPUs codenamed Rocket Lake. The event page mentions Z590 and B560 motherboards and there is even a rocket GIF embedded into the page.

At CES 2021 MSI revealed as many as 30 motherboards based on Intel 500 series chipset, such as MEG Z590 GODLIKE or MEG Z590 ACE, both representing the flagship series of this generation. The GODLIKE motherboard is even used in the promotional images. But MSI is not expected only to talk about Intel products. It seems apparent that the company will talk about its 2021 product lineup such as recently released graphics cards or monitors.

MSI has announced that viewers will have a chance to take part in the giveaway. MSI will be using Gleam to collect entries which can increase the chance of winning any of the listed prizes: MPG Z590 Gaming Carbon motherboard, Xbox Series X console, or MSI MAG274QRF monitor. 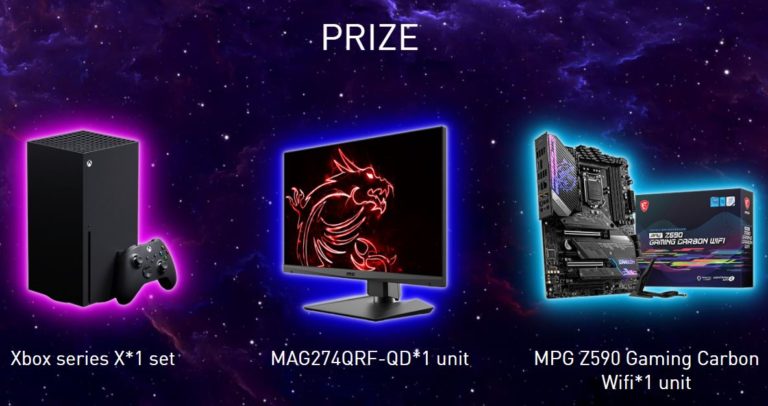