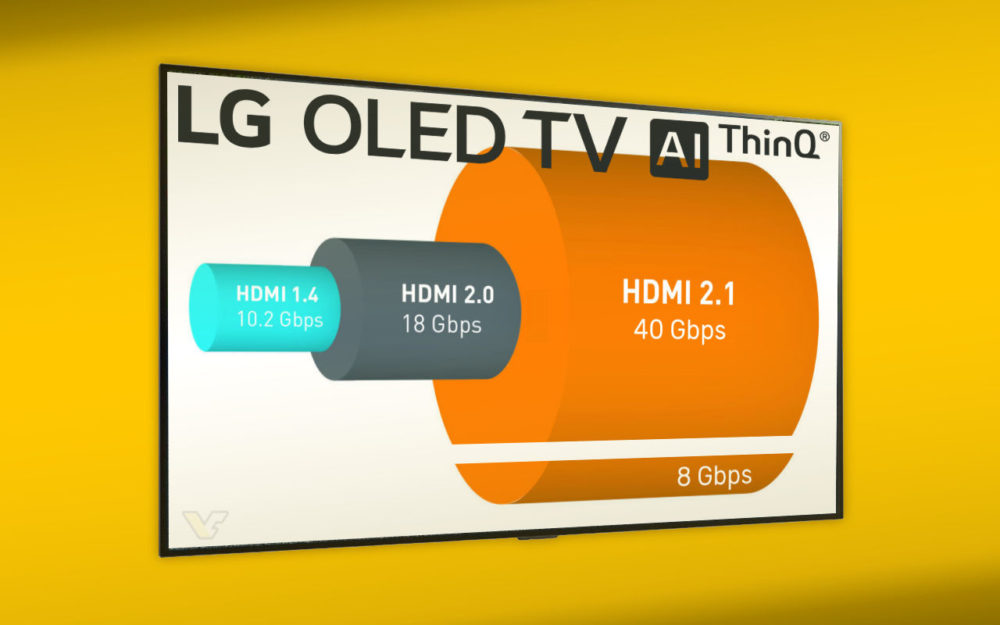 Probably the most interesting technology for 2020 is the new HDMI interface version 2.1. It’s a massive improvement in display technology and a huge opportunity for their manufacturers. The adoption of HDMI 2.1 will have a huge impact on the PC market, as AMD RDNA2 based gaming consoles will push the rendering to higher resolutions and refresh rates. This upgrade will not be ignored by NVIDIA, which is more than likely to adopt HDMI 2.1 specs for their upcoming architectures.

LG was the first TV manufacturer to offer full HDMI 2.1 TVs back in 2019. It appears that new models (2020 WX, GX, CX series) will be slightly downgraded, as the company believes that it makes more sense put the unused processing power towards AI-oriented calculations, rather than support 48gbps content that is “not available on the market”. What this basically means is that their TV will not be 12-bit (48 Gbps), but 10-bit (40 Gbps).

There is a risk that this will further segment already segmented HDMI 2.1 market for TVs. Other brands are not eager to adopt full HDMI 2.1 specs either, and if they are even mentioning the support, it’s for the selected models.

This is undoubtedly an important selling factor as we approach XBOX Series X and PlayStation 5 gaming consoles launch.

A quick rundown of the current 2020 TV HDMI adoption

LG has contacted me today to say that contrary to initial communications, and in a turn around from the HDMI 2.1 situation introduced with its 2019 4K TVs, none of its 2020 4K TVs, OLED or LCD, will carry ‘full bandwidth’ HDMI ports capable of handling HDMI 2.1’s maximum 48Gbps data rate. […] The 48Gbps rate is required to handle uncompressed 12-bit 4K at 120Hz with RGB 4:4:4 chroma sampling. LG tells me now, though, that while all the HDMIs on its premium 2019 TVs were indeed full 48Gbps examples, all four HDMIs on the WX, GX and CX OLED TVs will instead handle 10-bit (rather than 12-bit) 4K at 120Hz with RGB 4:4:4 chroma sampling. This implies a likely 40Gbps data rate.

Vizio announced at CES 2020 that all of its 2020 TVs will offer HDMI 2.1 ports. The company is grouping gaming enhancements, including ALLM and VRR, under the branding “ProGaming Engine.” However, Vizio’s cheapest line of TVs this year — the V-Series models — will have a different feature set, dubbed the “V-Gaming Engine,” that offers ALLM but not VRR.

In addition, X900H (XH90) will be the first Sony TV to offer support for HDMI 2.1’s VRR (Variable Refresh Rate) and ALLM (Auto Low Latency Mode). The former is variable refresh rate for smoother, lag-free gameplay via a PC or game console (must also support VRR). The latter allows the TV to automatically switch into ‘Game’ mode when it detects a game via HDMI. These features will be added through a future software update for X900H (XH90) only.
[..]
Like the 8K TVs, the 4K TVs will be equipped with a single HDMI 2.1 port (HDMI4) so you will not be able to connect two next-gen consoles via HDMI 2.1. Samsung’s hometown rival LG offers four HDMI 2.1 ports in its high-end LCD and OLED TVs.

HDMI 2.1 specs from a PC perspective

The most important features of HDMI 2.1:

What this means for PCs: