The Chinese PC manufacturer has revealed the specifications of the RTX 3050 graphics cards.

NVIDIA is yet to make the official introduction of its GeForce RTX 3050 series, possibly the slowest SKUs in the RTX Ampere series. The GPU manufacturer is expected to launch GeForce RTX 3050 Ti and RTX 3050 graphics cards for both desktops and laptops at some point in the future, possibly this quarter. The desktop variants have seen numerous delays and changes in the launch date to the point where NVIDIA has not provided an update to AIBs in 3 months.

Meanwhile, the RTX 3050 Laptop GPU series are constantly appearing on laptop makers’ websites, indicating that the launch of these variants is imminent. Unlike the desktop models, we actually know a lot more about RTX 3050 Laptop GPUs. The RTX 3050 Ti and RTX 3050 are more than likely based on GA107 GPU, which has not been used by NVIDIA for any other graphics cards yet. Both Laptop SKUs would feature up to 4GB of GDDR6 memory across a 128-bit interface. Such a small memory capacity and short bus indicate we are looking at the entry-level gaming segment (low to medium 1080p gaming). 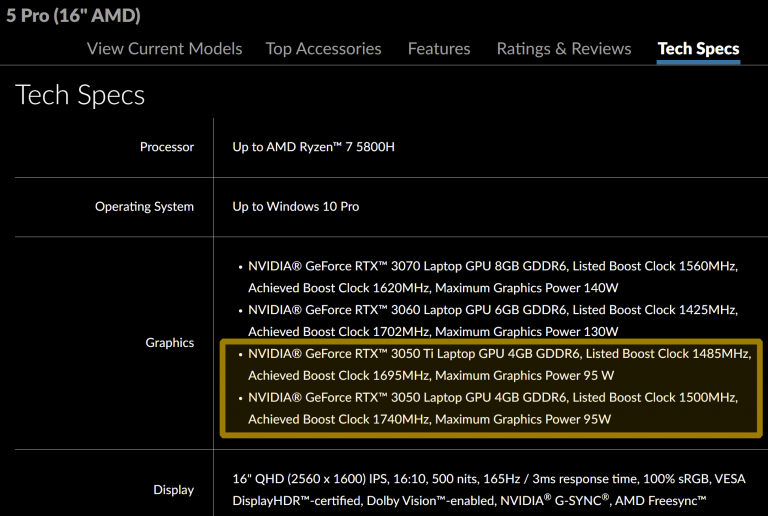 The performance of the Laptop GPUs heavily depends on the TGP (Total Graphics Power) variant that is being used. According to previous rumors, the RTX 3050 series will be adjustable starting from 60W. The Leak from Lenovo confirms that the SKU will go up to 80W. The value of 95W indicates that it supports Dynamic Boost technology, which can further increase the TGP by 15W to 95W maximum.

GeForce RTX 3050 Laptop series will be available with Legion 5 Pro laptop, which is equipped with AMD Ryzen 7 5800H CPU. This is a new gaming laptop equipped with 16-inch and 16:10 aspect ratio display. Judging from the specification of other graphics cards, Legion 5 Pro is using GeForce RTX 30 Max-P variants exclusively. Those are fully uncapped models with the highest available TGP.  That said, the reported clock speed of 1695 MHz and 1704 MHz for RTX 3050 Ti and RTX 3050 Laptop GPUs respectively should be the highest specifications of these SKUs.