There might be no pictures of the next-gen NVIDIA GPUs yet, but there are documents claiming it is already manufactured.

Over at Baidu (as spotted by @harukaze5719) there is a set of images posted by users suggesting that GeForce RTX 4090 graphics card should already be in production since August 16th. Had the full document been posted, it would confirm the clock speed for RTX 4090 model. However, it would also reveal which factory was responsible for this leak, hence it was blurred.

The documents show that there were four slots for RTX 4090 production planned, and most likely two different models. Each row is for a specific production line, divided by hours and numbers of processed GPUs.

Assuming that this leak is true, the RTX 4090 is listed with AD102 GPU and with 24GB VRAM. It would also feature four display connectors (3x DP & 1x HDMI). Such models were scheduled for production on August 16th. Unfortunately, the part that confirms when these cards are ready (the last column) is not fully visible. However, we can see it still says August. 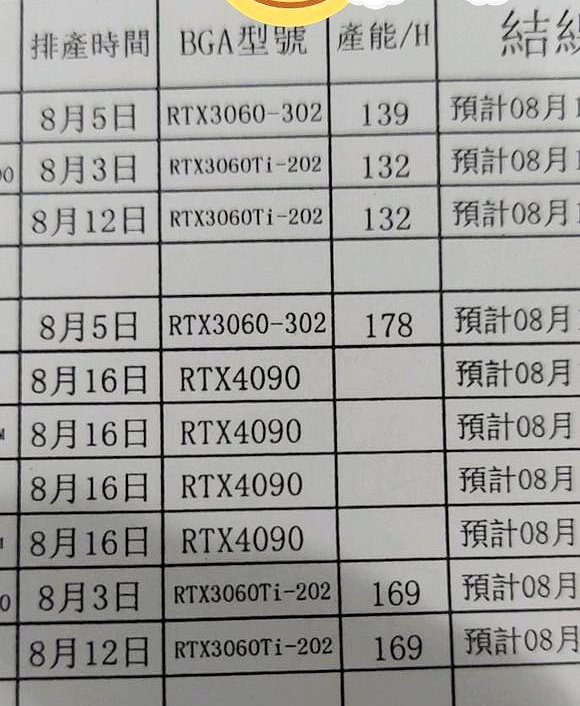 NVIDIA is expected to launch its GeForce RTX 40 series in October. This leak may confirm that RTX 4090 SKU which is the first card to launch is already in production. It usually takes a few weeks for new cards to reach retail stores from factory lines. This is assuming that no issues are found, and the specs are finalized on time. The BIOS may still be updated, and GPU frequencies may still change, but the memory configuration should now be confirmed.