Laptops with Arc GPUs are currently exclusive to the South Korean market, 2130 USD for Galaxy Book2 Pro with Arc A350M

Intel Arc GPUs only in South Korea (for now)

Following the report about Intel Arc laptops not being available despite official launch, the company clarified what went wrong in the communication of Arc launch.

Apparently, the launch is limited to South Korea and only one Samsung Galaxy Book2 Pro laptop. Therefore, Intel forgot to mention that this highly-anticipated launch of Arc GPUs on March 30th wasn’t even global. Intel Support has replied to their own tweet that suggested laptops with their own Arc GPUs are not to be expected till later this quarter. In a new tweet, Intel claims that those laptops did actually launch, but only for South Korea:

Apologies for the confusion, we had incorrect information. Samsung systems with Intel Arc graphics are available now in Korea and will scale to other regions. Additional OEMs in other regions will have systems in the coming weeks.

We have confirmed that there are indeed Samsung Book2 Pro laptops currently in stock on official company website with Core i7-1260P Alder Lake CPU and discrete Arc GPU. Thus far, only one model “NT950XEE-XD72S” is listed with Arc A350M GPU and 1080p AMOLED screen: 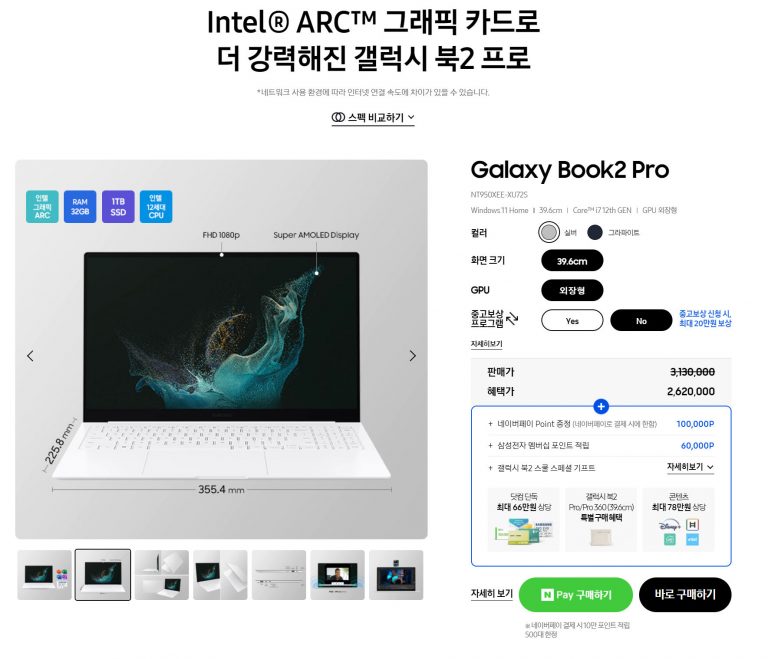 One must say that for 2,620,000 KRW (2,137 USD) one would have expected much better specs, especially a better screen. For that reason, our sources in South Korea say that this laptop is not a particularly popular choice among consumers at this price point. Although it does come with 32GB of RAM, 1TB of storage and Core i7 CPU, the A350M GPU is still the slowest Arc SKU from the entire mobile lineup.