It has now been confirmed through leaked Intel slides that PCIe Gen5 M.2 SSD support is not coming to Raptor Lake. Therefore, this rumor is false.

Moore’s Law is Dead has an update on upcoming Intel flagship motherboards for Raptor Lake CPUs.

Intel will be rolling out an update to its LGA1700 platform somewhere in the third quarter this year. Existing 600-series motherboards will continue to support upcoming 13th Gen Core CPUs codenamed Raptor Lake, but it is apparent that a new lineup of motherboards will bring new features.

Recently ASRock announced their entire 600-series lineup will support Raptor Lake processors, but this information appears weeks ahead of the expected new series announcement. This shouldn’t imply that the 13th Gen Core series will launch before Z790 motherboards though, as pointed by MLID.

One of the new Z790 features is reportedly the support for M.2 SSDs operating with PCIe Gen 5.0 interface. Although Intel 600-series motherboards already have Gen5 interface for its primary X16 slot, there is no support for M.2 Gen5 drives just yet. Those can only be used through adapters. 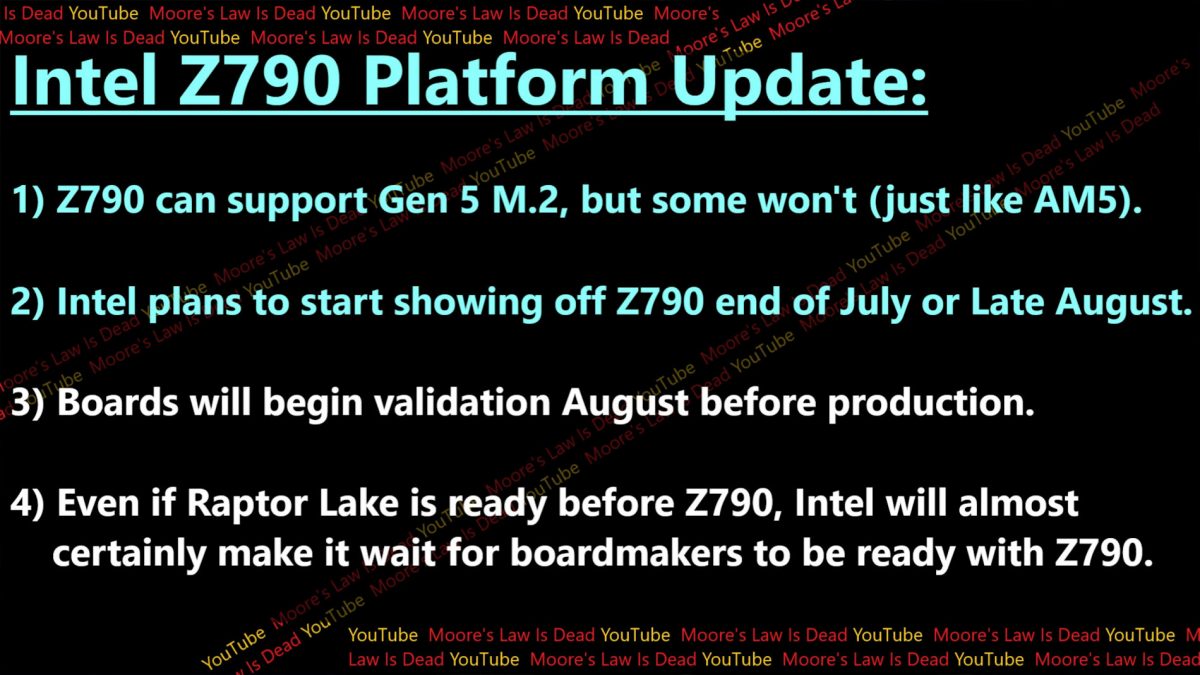 By adding M.2 Intel will have a platform feature parity with AMD’s just-announced 600-series. The flagship X670E motherboards will support Gen5 GPU and SSD products, becoming the first motherboard to do so. Intel clearly has no intention to leave such an important storage feature exclusive to AMD X670E motherboards for Ryzen 7000 “Raphael” CPUs.

Furthermore, it is said that Intel will allow boardmakers to introduce their new Z790 motherboards as soon as late July or August, even before Raptor Lake CPUs become available. However, it is not expected that new CPUs will go on sale before these motherboards are available.