Intel might have just spilled the beans on upcoming overclocking features for its next-gen platform.

More importantly, Intel 7-based Raptor Lake is also getting “enhanced overclocking features”, some of which might have just been confirmed by Intel. Rumors suggest Raptor Lake will bring higher clocks to the LGA1700 platform, exceeding the highest frequencies achieved by Alder Lake CPUs. Overclocking will also play a big role in Intel’s 13th Gen Core deployment, some of those features are apparently already supported by Intel’s own Extreme Tuning Utility (XTU): 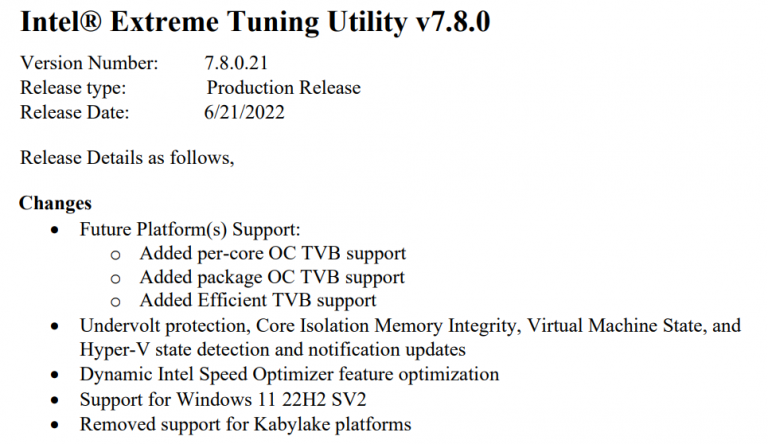 A new update (7.8.0) was just released that brings support for “Efficient TVB”, per-core and package OC TVB support. The TVB stands for Thermal Velocity Boost, which made its debut with Comet Lake series more than two years ago. This technology is now being updated for 12th Gen and 13th Gen Core series.

Interestingly, one of the hardware leakers recently mentioned E-TVB in regard to the upcoming series. Raichu is claiming that 6 GHz frequency could appear in one of the upcoming SKUs, but this could be a part that launches later as a special edition.

?6 GHz turbo MAYBE will appear in one SKU. (in ETVB mode)?
I guess it should not be normal sku. https://t.co/SFubzjdXNG

One might guess that the high-frequency part could be Intel’s response to Ryzen 7000 series with 3D V-Cache, expected to debut by the end of this year. The Efficient TVB clocks may only apply to some SKUs, such as the flagship Core i9-13900KS. Similarly, the TVB clocks are only available with Core i9-12900KS special edition processor which has 5.5 GHz clocks for 1-2 cores out of the box.

Worth mentioning that the E-TVB was previously rumored to be called “Enhanced” not “Efficient”, which raises a question if both terms refer to the same type of boost technology. Furthermore, TVB support depends on thermal efficiency of the whole platform, so results may vary per SKU and cooling.