Intel’s first Sapphire Rapids for workstation tested ahead of launch.

The CPU maker is preparing two product series for Xeon Workstation series, namely the W-3400 and W-2400 lineups. The specs of these CPUs are well known at this point, and we also know that Xeon W9-3495X is the flagship Sapphire Rapids processor for such systems.

Geekbench entry confirms that the CPU features 56-cores (but no mention of HyperThreading support). This is the highest configuration available with the new Sapphire Rapids silicon. The CPU has a base clock of 1.9 GHz and boost up to 4.6 GHz. Furthermore, the processor reportedly has 105MB of L3 Cache and 56MB of L2 cache.

This system was paired with 128GB of DDR5-4800 memory, which is supported by the platform called “Fishhawk Falls”. This memory was installed onto Supermicro X13SWA-TF motherboard, which had already been leaked in December. 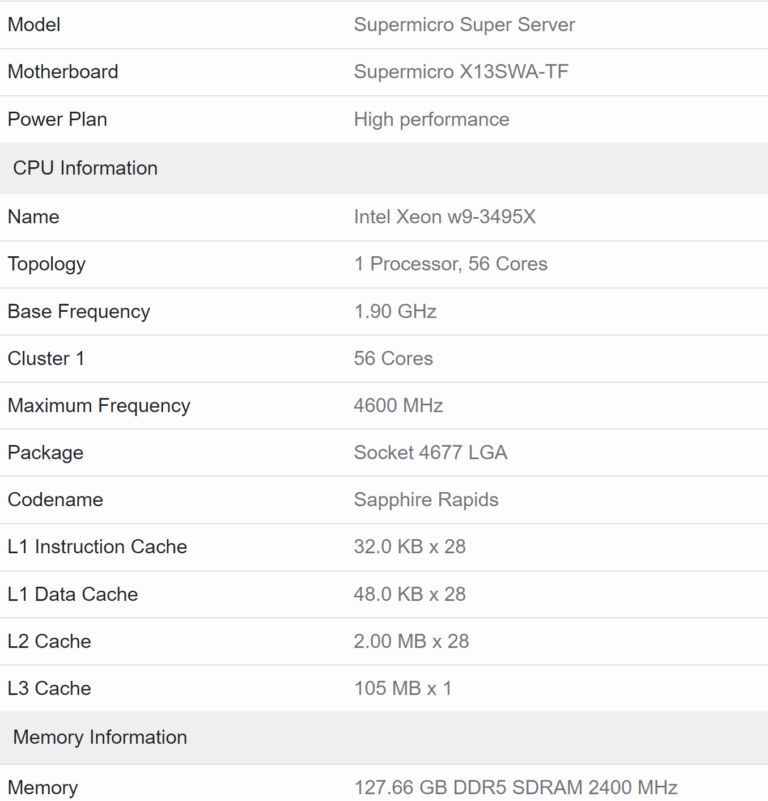 In terms of performance, the single-core score is 15% lower than Threadripper PRO 5995WX, at 1284 points. Multi-core performance is a bit more complicated to calculate because Geekbench has Threadripper performance data all over the place. However, after looking at most recent tests, it can easily reach 40K points.

Intel has already confirmed that Xeon W3400/2400 series will launch on February 15th. It is very likely that some reviewers may already have access to these CPUs, otherwise it could be the motherboard company testing the processor themselves.