According to Enthusiastic Citizen sources, Intel will launch two Xeon series for its workstation/HEDT systems.

The Sapphire Rapids-WS lineup is to be split between Xeon WX-3000 and Xeon WX-2000 series. This is indeed the first time we learn details about the 2000-series lineup.

It is said that 4th Gen Xeon for workstations will feature as many as 16 SKUs. This is far bigger lineup than AMD’s Ryzen Threadripper PRO series, but at the same time, Intel has been somewhat slow to compete with AMD for high-end desktop systems, so this just the company catching up.

What important to note is that Xeon WX-3000 series are to feature up to 56 cores and will use MCM (Multi-Chip-Module) design of Sapphire Rapids silicon. This variant will also support up to 116 PCIe lanes (presumably 5.0). The series will support octa-channel DDR5 memory. 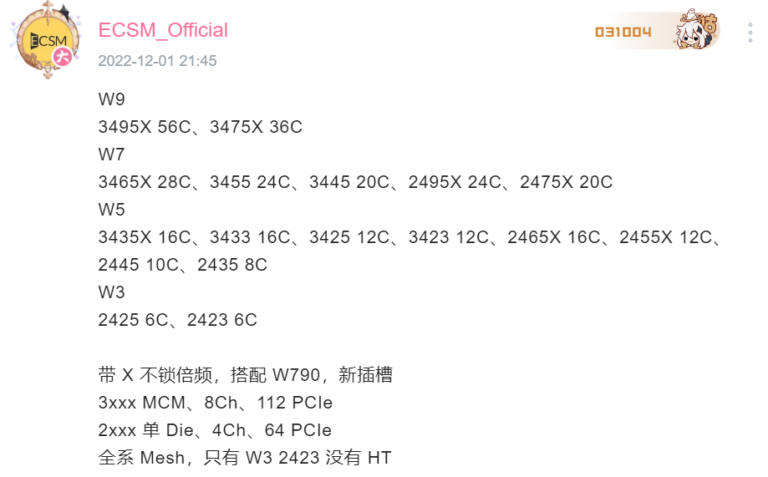 On the other hand, Xeon WX-2000 series will feature up to 20 cores but will go as low as 6 cores. This chip will support 64 PCIe lanes and quad-channel memory. The flagship SKU from these series, the 20-core W7-2475X will support overclocking, which is listed as “X” next to the SKU name.

ECSM sources further claim that W3-2423 SKU will not support hyper threading, therefore only 6 threads will be available with this CPU. One might wonder what would be the exact selling point for this SKU, but one should also look at what Intel’s new W790 platform offers first. Fast quad-channel memory and a comprehensive PCIe lane support is something that may not always require a powerful GPU.

According to the rumors, Intel might launch its Sapphire Rapids-WS series as early as April next year. It is not clear if both the 3000 and 2000 Xeon series will debut on the same day, though.