YuuKi has been sharing confidential information on HPC series from Intel and AMD for a very long time. With access to non-public information and hardware, he has already revealed many details that would otherwise remain secret until launch. With some launches slipping away by months (if not years), this is probably as close as we get to some details of future architectures.

Recently, the same leaker revealed the first specifications of Intel Emerald Rapids, a successor to Sapphire Rapids and Granite Rapids, both product series seemingly pushed back due to never-ending delays of Intel HPC products. It looks like the newest update confirms that four generations from now, Intel will adopt PCI Express 6.0 technology. 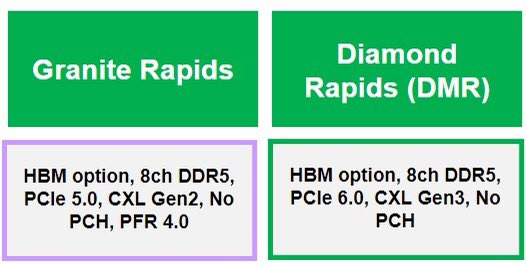 Intel has not confirmed when Diamond Rapids will be launching, in fact, the company never even confirmed the codename. However, the product was listed as ‘Future Gen’ featuring only big core (Performance).

The new details confirm that Diamond will support PCIe Gen6, which would be an upgrade over Granite Rapids with Gen5. Furthermore, 7th Gen Xeon Scalable architecture would also support CXL 3.0 (Compute Express Link), which is based on PCIe Gen6 implementation. The CXL 3.0 interface specifications were only released in August this year, but it will take another 3 years at least until we see it implemented in Intel Xeon products.

Unfortunately, there are no details on core count or CPU cache. The leaked slide may confirm, though, that Intel will continue using HBM memory in their HPC processors in the foreseeable future.