Intel’s upcoming gaming high-end graphics card has been pictured for the first time.

YouTuber Moore’s Law is Dead, whose Intel sources have been reliable in the past, has now published photos of an early engineering sample of the Xe-HPG based desktop graphics card. The model that was photographed from a few angles is equipped with 512 Execution Units, which means it’s the highest model in the upcoming lineup.

The Xe-HPG 512EU engineering sample features one of the three cooler designs that are being evaluated right now. It is said that the final model might feature a white cooler.

According to Moore’s Law is Dead Intel Xe-HPG SKU with 512 EUs might feature boost clocks up to 2.2 GHz, a bit higher than NVIDIA, but within the range of the current AMD Radeon RX 6000 series. The model that is currently being evaluated has 16GB GDDR6 memory and a 256-bit bus, which has already been confirmed earlier through multiple sources. He adds that the graphics card has a TDP of 275W, from an initial 225 to 250W. The sample that was pictured features 8-pin and 6-pin power connectors. The TDP range of course applies to the desktop models, as DG2 GPUs will also be used in laptops.

Furthermore, it is said that Xe-HPG with 512 EUs will offer performance between GeForce RTX 3070 and RTX 3080 graphics cards from NVIDIA. However, in its current state, the graphics card is not expected to perform better than RTX 3080. Interestingly it is also mentioned that Intel is working on its DLSS competitor, which is internally called XeSS. That would mean that Intel DG2 GPU family would support hardware-accelerated ray tracing as well as its own resolution upscaling technology. It does not mean that both features will be available to consmers at launch though.

YouTuber does not mention a possible launch date for the DG2 512EU model, but he does say that the SKU is highly unlikely to be ready before the fourth quarter of this year. The wider availability should be expected in 2022, he adds. 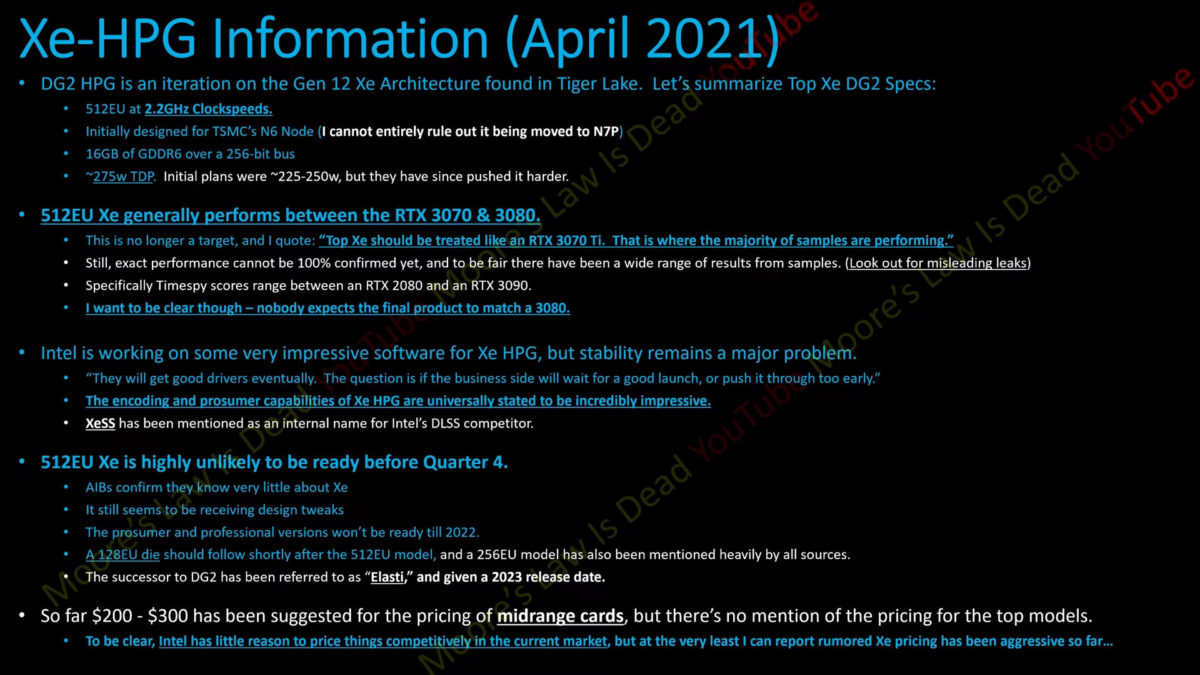