It appears that Intel DG1 has been spotted in the SiSoftware database.

This is neither the first nor the last time we will be finding Intel’s upcoming discrete graphics leaks in the SiSoftware database, but the latest leak appears to confirm the discussions we have been having ever since Intel showcased its SDV model of the DG1 graphics card.

The DG1 has been rumored to reflect Intel Tiger Lake specifications with rumored 96 Execution Units (EUs) – which means 768 cores. It was also expected that the card might have 3GB onboard, pointing at a (very) entry-level nature of the product. After all, it’s an integrated mobile chip converted into desktop graphics, or so the speculation appears to suggest. The Development Vehicle platform is not expected to take the market by the storm or surprise anyone, it is rather a chance for software developers to prepare for Intel’s desktop graphics market entry, or if you prefer, the first drop before the storm.

The DG1 would feature the Xe-LP graphics core, which would be substantially different than Xe-HP or HPC. Other rumors suggest that Xe DG2 could potentially have not 8, but 16 cores per EU.

The Xe-LP graphics have already made its appearance in the database, where a sample with (presumably) all 120 EUs enabled has been seen (this equals 960 unified cores).

Earlier this month Intel has revealed its compute-oriented processor named Xe-HP. Based on the size, the LGA design, we are not expecting this processor to launch for gaming and consumer markets anytime soon, likely ever.

Despite numerous events, teaser, and AMAs on Reddit, Intel has not confirmed which market segment the company will focus on in 2020. However, we still hope to hear more about the DG2 model this year. 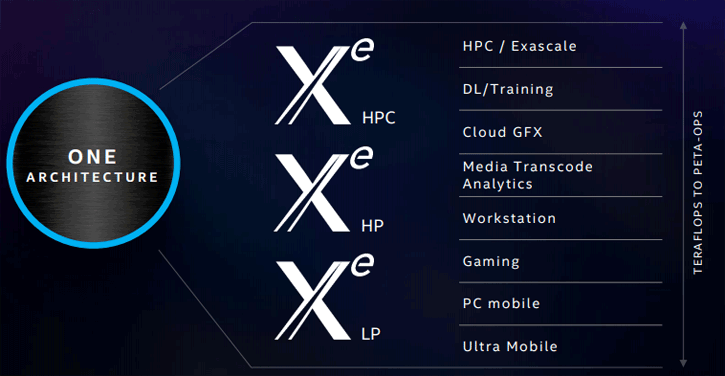