The first Intel W790 motherboard has been listed by a Canadian retailer.

The rumors about ‘Sapphire Rapids’ workstation chipset called W790 are actually go back as far as mid-2021. That’s when we shared a slide featuring Sapphire Rapids as a HEDT (High-End Desktop) product supported by the upcoming W790 chipset. This product was supposed to launch in the second quarter of this year, but Intel is clearly having trouble keeping Sapphire Rapids products on a schedule.

More than a year later, we now know that Intel will introduce its 4th Xeon Scalable CPUs based on Sapphire Rapids on January 10th. Thus far there is no word on HEDT series, at least not officially. However, a Canadian retailer called ATIC now lists a SuperMicro X13SWA motherboard based on the W790 chipset with some preliminary specs. 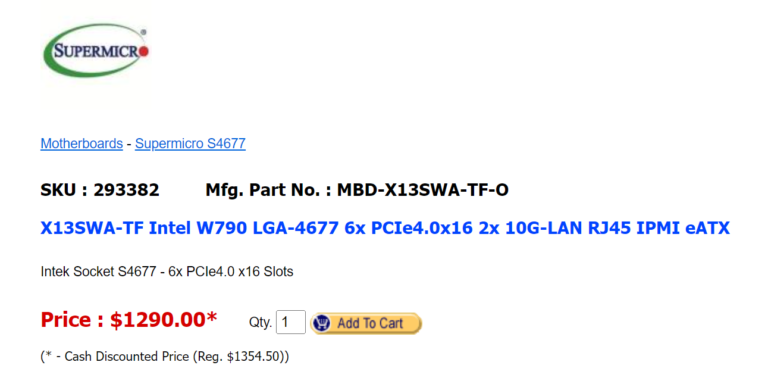 The W790 motherboard would support up to 6 PCIe Gen4 x16 slots (so no Gen5 support), two 10 Gbit LAN ports, and it would be an E-ATX form factor, which is now often used by server-grade or enthusiast boards. Furthermore, the LGA-4677 socket mentioned by this listing clearly means Sapphire Rapids CPU, but one should not rule out the recently spotted Raptor Lake processors with 34 cores just yet. The motherboard is currently listed at $1290 (CAD) which equals to around $963 (USD).

Intel is yet to confirm its plans for HEDT market, but it seems the company will offer consumer Core-S series, business Core vPRO and HEDT/server Xeon products. On the other side we have consumer Ryzen, business Ryzen PRO, Threadripper PRO for content creation, workstation EPYC SP6 (still unreleased) and EPYC SP5 for datacenters launched earlier this month. Intel clearly has some catching up to do on the high-end market.