At GDC 2021 Showcase Intel has released a teaser for its upcoming gaming Xe-HPG GPU architecture.

A short video teaser has been released during GDC 2021 Showcase, an online game developer conference where Intel showcasing its latest CPU and GPU architecture. Since the conference is related to games, Intel is mainly talking about its client products, such as the recently announced 11th Gen Core S-Series codenamed Rocket Lake-S.

The company has also released a teaser that shows an energy beam directed at the Xe-LP chip. This energy expands the silicon into 5 layers of blocks, possibly indicating that the chip has 5 times as many Execution Units. The Xe-LP DG1 GPU tops at 96 EUs, which indicates that the Xe-HPG GPU could have around 480 EUs. There have been rumors that Xe-LP could actually be 128 EU, but Intel has never released such a chip.

Intel Xe-HPG architecture is believed to launch by the end of 2021. So far Intel has not revealed any details on its architecture, but the company did confirm that the processors based on this architecture will be manufactured by an external foundry.

It is rumored that the Xe-HPG DG2 family will feature three different GPUs: 512EU, 384EU, and 128EU. The top chip would offer competitive performance in comparison to AMD Navi 22 NVIDIA GA104 GPUs.

The teaser features a binary code that has not yet been decoded. If any of our readers have a clue what it may mean, feel free to post your findings in the comment. 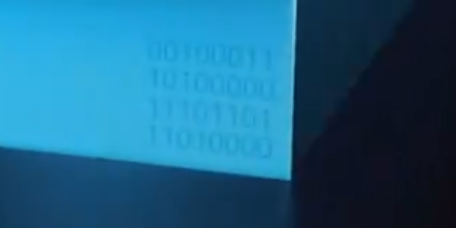