Intel is now officially inviting people who own an Odyssey Cardholder to register. Some of those people may expect swag related to the upcoming launch of Xe-HPG architecture. 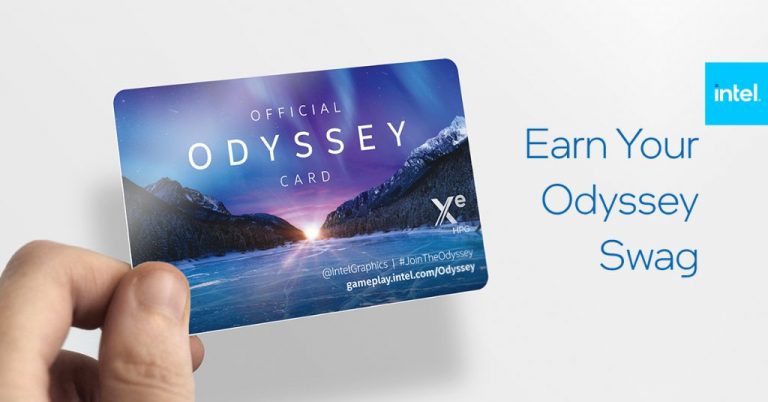 Just today Intel confirmed its DG2 family of graphics processors is sampling. The company has been relatively quiet on its Xe-HPG architecture, while heavily promoting its Xe-HPC and HP series on social media. Intel is now expected to launch its discrete gaming GPUs later this year, but the company has never provided a release date.

It seems though that this release is coming soon though, as teased in the description of the Odyssey Cardholder promo:

Thank you for joining Intel on this Odyssey. We are soon heading toward a milestone moment, the pending release of the Xe HPG microarchitecture from Intel. Some of you received an Odyssey card and were the first to engage with Intel on this journey. Now is the time to redeem this card, which is one in many steps we hope to formally take forward with you. We have a few required fields here to confirm you have received a card from us. As well if you agree to provide additional information, it will help us follow and recognize you for your commitment with Intel.

Intel DG2 GPUs are to launch for both desktop and mobile markets. The latest rumors suggest that Intel will be initially focusing on the mobile market, by offering all-Intel gaming laptops. There were many desktop DG2 leaks as well, however, Intel has been very reluctant to share any details on those GPUs.

In any case, we hope that this description does indicate that Xe-HPG microarchitecture is indeed coming soon and the swag that will be sent will also include an invitation for the launch event.

Do you still have your special event #JoinTheOdyssey cards? Now’s the time to use it! Fill in the details on the form here, and some swag may soon be coming your way… https://t.co/BuKBRk6aqb #XeHPG pic.twitter.com/CSLOQOjW3W