Did Intel reveal the specs of its flagship Arc A780 desktop GPU?

Interesting detail on Intel discrete desktop Arc GPU has been discovered by 3DCenter.

What 3DCenter noticed is that in Intel’s official Arc Control presentation video, specs of a discrete desktop GPU might have been shown for a split second. The Arc Control is Intel’s new GPU monitoring software for Arc Alchemist and Xe Iris discrete GPUs. The presentation shows various features of the new software, including its new Performance Tab for GPU monitoring and some basic overclocking.

Data such as GPU power or core and memory frequency will be shown either through the Arc Control software or a built-in screen overlay that can be enabled in games. Intel is showing this tab repeatedly in the video, but only for a second, we can see the specs that do not match any mobile Arc GPU that was announced 2 days ago.

According to those two screenshots, the GPU clock would reach 2200-2250 MHz with over 99% GPU utilization. It is the fore safe to assume that this is a boost clock for Intel’s new Xe-HPG GPU architecture.

A 2.2 GHz GPU clock shouldn’t really be exclusive to desktop GPUs, though. The Arc A350M Geekbench data shows that the GPU can reach similar frequency during OpenCL test. Officially the core clock for this GPU is 1150 MHz, therefore that would be the base clock, while 2.2 GHz is boost.

So how do we know the Arc Control video is showing desktop GPU? First give away is the GPU Power of 175W. None of the mobile parts presented by Intel have such a high power draw. Only Arc A770M has a maximum GPU power of 150W, but theoretically it could reach higher thanks to Intel Deep Link technology (which unlocks unused CPU power for the GPU like NVIDIA Dynamic Boost).

Since this is GPU power only, other desktop card components will still add more power, so the whole card might easily consume more than 200W, 3DCenter predicts. We do not know if Intel’s GPU Power accounts for memory subsystem yet. Nevertheless, such a GPU power was leaked a while ago for the SOC1 GPU (ACM-G10) for desktop parts. Do note that there is a difference between TGP, TDP or GPU Power metrics, but the details on Intel’s implementation are yet to be confirmed once desktop Arc GPUs are released. 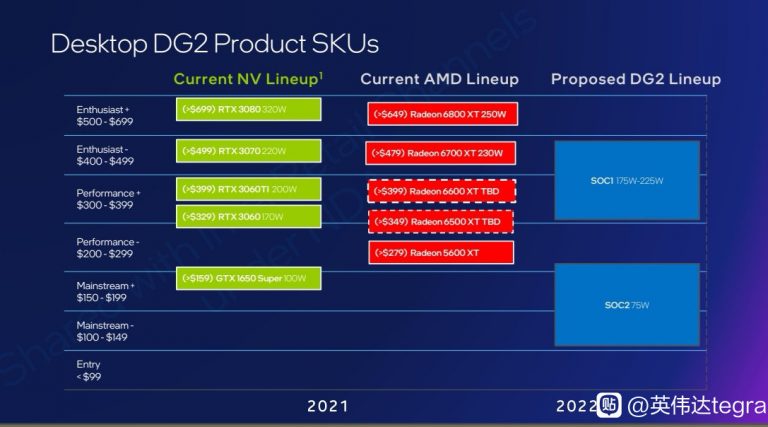 Furthermore, the VRAM clock of 1093 MHz suggest we are looking at an effective peed speed of 17.5 Gbps, while the fastest mobile GPU has 16 Gbps. Memory overclocking for mobile GPUs is an extremely unlikely feature to be enabled, thus this might confirm that desktop Arc will not be slower than, for instance, GeForce RTX 3070 (14 Gbps).