There has been a lot of talks recently on future HEDT processors from AMD and Intel. It seems that consumers waiting for a next-gen upgrade for 16+ core systems might need to wait a bit longer.

We received a partial roadmap featuring Intel Sapphire Rapids HEDT, a successor to Cascade Lake based on the Glacial Falls platform. The latter still being built using a 14nm node, which is why the AMD Threadripper platform has seen a lot more interest from consumers.

The roadmap that we received from a source that has previously shared other roadmaps with us, but not all of them were up to date though. It mentions Sapphire Rapids as a HEDT product arriving in late Q2 2022. With the recent announcement of Sapphire Rapids Xeon being delayed by at least two quarters, we do not know if this means that the HEDT series will also see a delay. 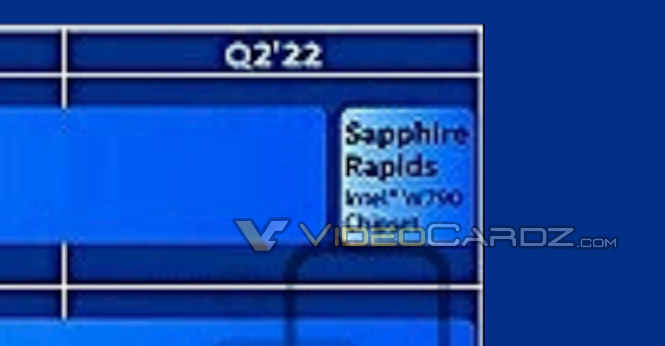 What is definitely interesting is the fact that Sapphire Rapids HEDT would depart from X chipset codenames in favor of the W series. The roadmap appears to list the W790 chipset as the platform for the next generation of HEDT.

We have also heard a rumor that high-end Alder Lake-S parts might actually adopt X moniker instead of K (think i9-12960X for LGA1700 socket). Whether that means Sapphire Rapids HEDT would also get a new moniker (possibly W, like the workstation Xeon parts) – we don’t know.  Of course, this is all speculation based on some preliminary information we received over the past few weeks.

Intel Sapphire Rapids HEDT listed on the W790 chipset may suggest that the product will launch simultaneously with Raptor Lake, also expected to support a 700 series chipset (up to Z790). Intel Raptor Lake will succeed Alder Lake, which launches later this year. With all that in mind, AMD “Chagal” Ryzen Threadripper 5000 series, supposedly launching around Q2/Q3 2021 won’t see much competition till next year.