A small update to our Arc A-Series story from June this year. Intel has reviewed the recommended system specs for Alchemist desktop GPUs and now has added AMD Ryzen 3000 and 5000 series as compatible.

The company already confirmed that Intel Arc A-Series will need a ResizableBAR feature to work. Any system that does not support this technology will suffer from significant performance loss – this has already been confirmed with Arc A380 reviews. Intel is not hiding this fact, the company has been very advocate about the issue that their GPUs are simply not designed to go work with older systems.

What this essentially means that Arc GPUs will require a relatively modern CPU. Anything older than Ryzen 3000 or Intel 10th Gen Core series is not guaranteed to work well with Arc. However, do note that some older systems do support ReBAR, so there is still a chance that won’t be an issue. 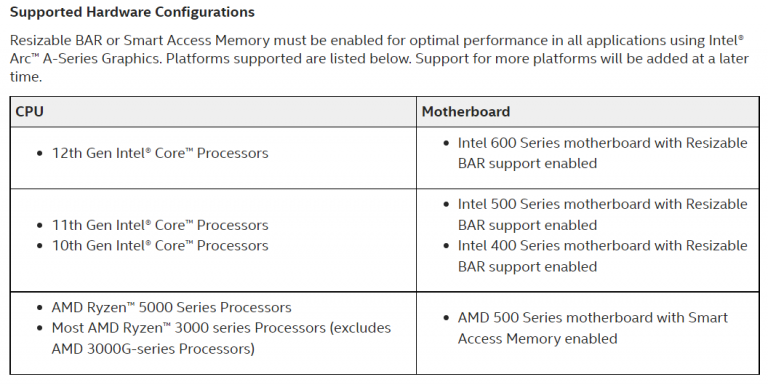 Furthermore, Intel Arc requires Windows 10 20H2 or newer or Windows 11, so obviously it will not work with Windows 7 (there are no drivers for this operating system anyway).

Tom Petersen confirmed Intel is not planning to optimize Arc A-series for systems without ReBAR, so the recommendations are unlikely to change in the future. This is something to keep in mind when choosing Arc GPUs over competing products, who tend to work without ReBAR just fine.

Intel Arc A7 GPUs launch next week on October 12th.