An interesting thread has recently appeared on Reddit. It covers the concept of the Digital Linear Voltage Regulator (DLVR) which might be used with the upcoming Intel Raptor Lake CPU series.

The thread actually redirects to patent hunter Underfox, who discovered that Intel had plans for DLVR since January 2020 at least, but the patent was not published till July 8th this year. This is not the first time we are hearing about DLVR though, as the acronym had already appeared in a leaked slide that we posted exclusively back in March 2021, except at the time we had no idea exactly what it meant. 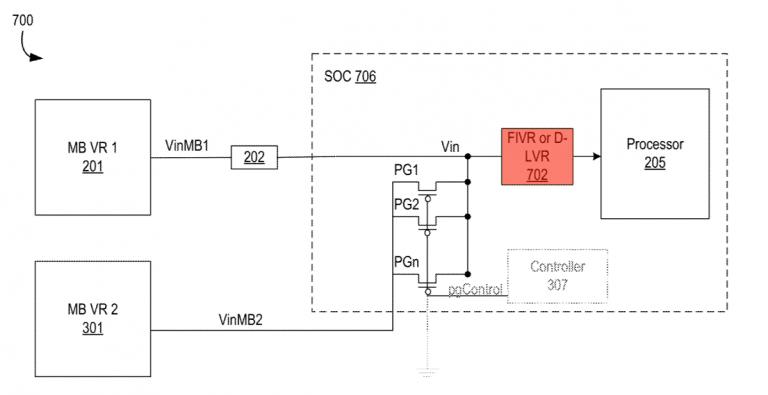 So as it turns out DLVR stands for Digital Linear Voltage Regulator and it is explained by Intel in a patent called “Digital Linear Regulator Clamping Method and Apparatus”. The document claims that by placing an additional voltage regulator in parrel to the primary regulator, for instance on a motherboard, the power consumption of the processor core can be lowered. This power delivery modification is relatively cheap to implement and has low complexity of tuning, the document explains.

Intel researchers claim that it is important to determine input voltage for the regulator in order to account for sudden loading requirements for the SoC, CPU, or GPU. It is said that higher than the necessary voltage for the regulator will generate more heat and power consumption. There are several factors that cause this increased voltage, mainly motherboard load-line (LL) and maximum processor current requirement, but also inaccuracy in motherboards voltage regulator. By implementing digital-LVR in parrel to the primary voltage regulator, the CPU core input voltage is lower, and as a result, power consumption is reduced.

Intel researchers have concluded that DLVR can reduce CPU voltage by 160mV, which translates to about a 20% to 25% drop in CPU power consumption. A 21% of voltage drop on the CPU translates to approximately 7% performance gain.

With all this in mind, it appears that Intel 13th Gen Core series codenamed Raptor Lake (launching for both desktop and mobile devices) will not only increase the core count (16 Atom cores) but also provide improvements to CPU cache, LPDDR5X memory support, and performance and power efficiency gains due to new Digital Linear Voltage Regulator. Some of the features may require an upgrade to Intel 700 series motherboards though.