Roadmaps for Intel’s consumer, workstation and data-center products have been leaked

The rumors were true, Intel is indeed launching a refreshed Raptor Lake-S processors next year.

The socket longevity will be extended for another series. This is what the new leaked Intel roadmap appears to confirm. The slides posted today by @9550pro show desktop and workstation products coming within the next 5 quarters. This includes yet unreleased Sapphire Rapids-WS and updated Raptor Lake-S CPUs.

This is the first time we see direct reference to Raptor Lake-S Refresh. It appears that the plan is to launch them in early third quarter of next year, so possibly even sooner than 1 year after the first 13th Gen Core CPUs were announced. 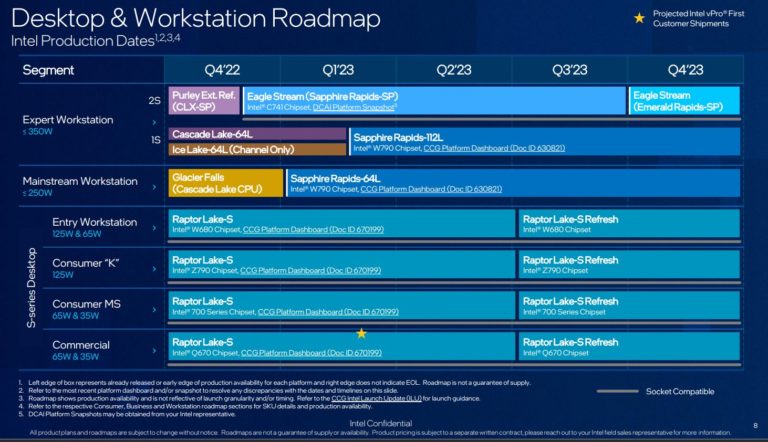 According to this roadmap, Intel would be refreshing its entire desktop platform with 125W, 65W and 35W SKUs. What is important to note that the current 13th Gen Core processors with base power lower than 125W were not yet released, but they are due to come out next month. This means we now learn that within 10 months or so there will be an update to those SKUs as well. 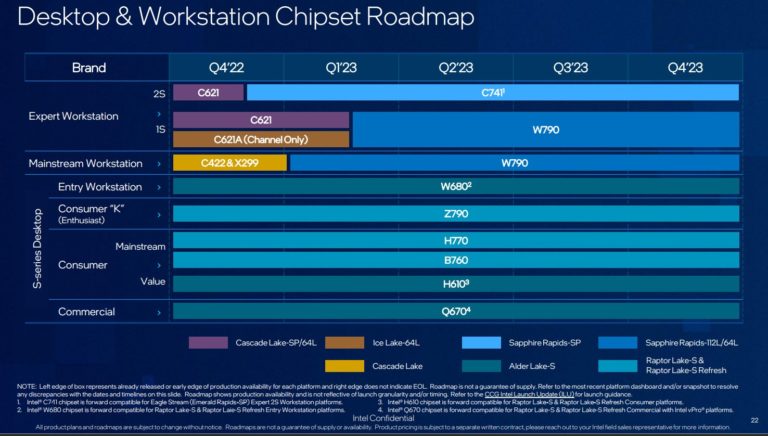 Even more importantly, no 800-series chipset update is planned for the refreshed series. This means that all existing and soon-to-be-released 700-series boards will be compatible with the updated CPU series. The Z790 motherboard will remain the highest tier for gaming systems, which will be accompanied by W790 platform for Sapphire Rapids-WS workstation CPUs. 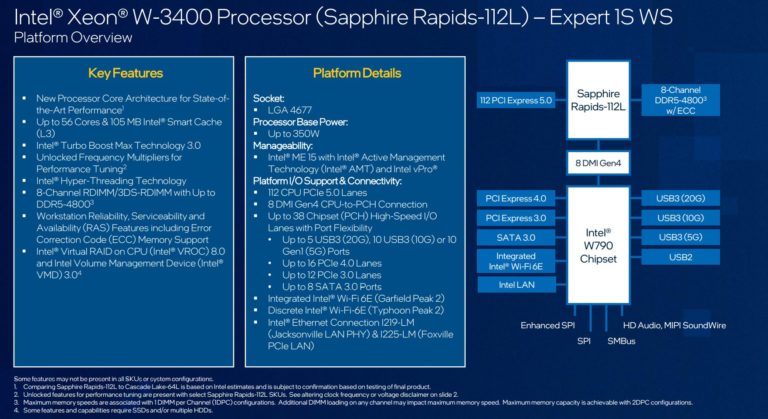 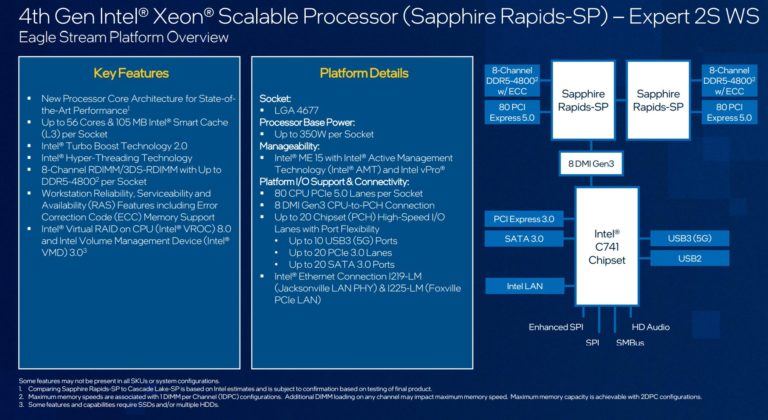 Leaker also posted Intel slides for the entire Sapphire Rapids-WS and Sapphire Rapids-SP series. These are the new HEDT/workstation and data-center products. The leak also features every SKU confirming their core/thread configurations and clocks. Furthermore, this also confirms that there will be unlocked variants, which brings overclocking for high-power Intel CPUs back again on the table. 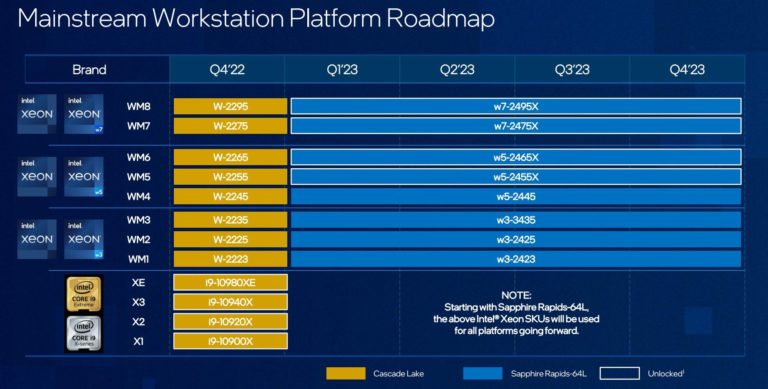 The slide above shows that Xeon Workstation series are to succeed the Core-X lineup entirely. What Intel appears to confirm here is that Xeon SKUs will be used for workstation/HEDT platforms moving forward. This basically means that Core-X CPUs are discontinued. The new CPUs are also confirmed to launch as early as Q1 2023, which was part also mentioned by some leakers.

The W-2400 series are confirmed to feature default TDP up to 225W. Enthusiast should expect up to 24 cores and clock speed up to 4.8 GHz. Those processors will support quad-channel memory up to DDR5-4800 spec. 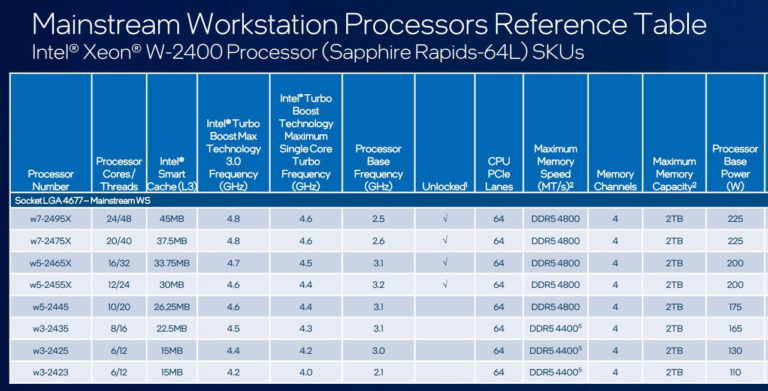 The higher-end W-3400 series will feature up to 56 cores and clocks up to 4.8 GHz. This is a more capable platform with PCIe Gen5 lanes increased from 64 to 112. Furthermore, the TDP is higher for those SKUs as well, going up to 350W (base power). Those systems will also support octa-channel DDR5 memory. 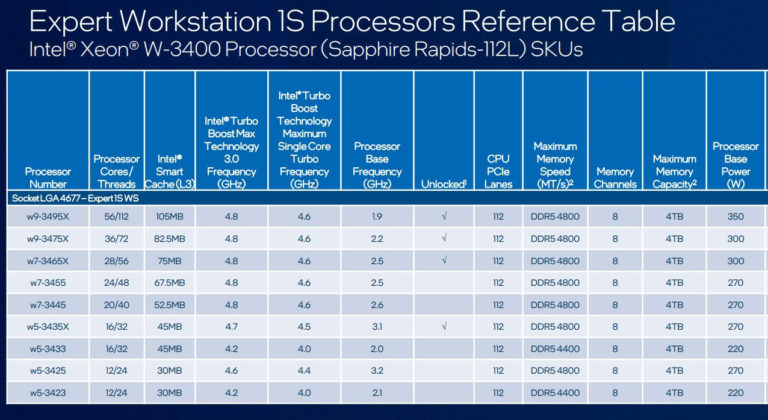 Very similar specs are to be used by Sapphire Rapids-SP server series. For the Xeon Platinum 8400 series users can expect up to 3.8 GHz clocks and no support for Intel Boost Max 3.0 (available with HEDT series). This platform will also support only 80 lanes for PCIe devices, but the 8-channel memory is retained.

Overall, this leak shows an impressive lineup for Intel CPU series next year. The company will refresh its desktop CPU series just as AMD is said to deliver their Ryzen 7000X3D CPUs. At the same time, we should expect Zen4 update for Ryzen Threadripper PRO series. In the end, both companies will compete in several markets, which is a big win for consumers and for finally enthusiast as well.