The design and basic information on the NUC 12 Enthusiast have already been leaked last week. It was revealed that this new generation of Intel’s tiny PCs will feature Intel’s latest architectures, including 12th Gen Core H-Series codenamed Alder Lake and Intel’s newest Arc Alchemist GPUs. FanlessTech appears to have more information on each variant of this system, and there are at least three.

Intel Seprent Canyon NUC would be offered with two CPU options: Core i7-12700H (14-core) or Core i5-12500H (12-cores), both based on Alder Lake-P silicon with power limited to 45W. Intel is planning to segment this product into three discrete GPU options, either with 16GB VRAM, 12GB or 8GB. 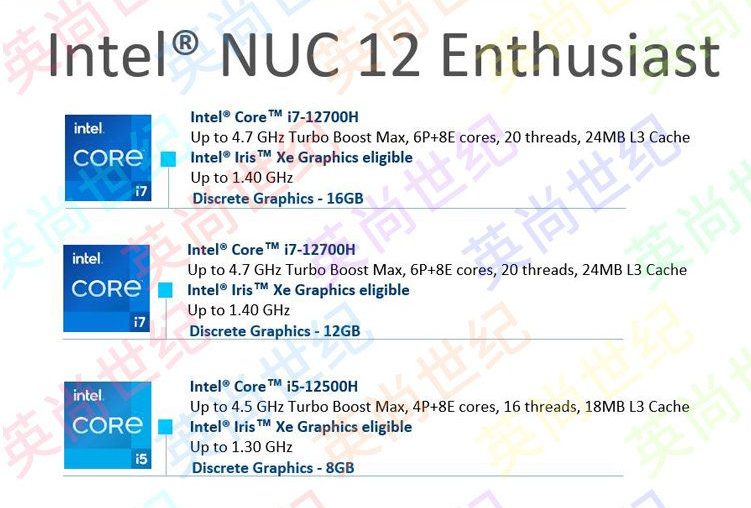 The leaked specsheet does not directly refer to the discrete GPUs being used by this device, but it was already confirmed that these are Intel’s own Arc processors. Listed memory configurations for discrete GPUs indicate Arc A770M (16GB), A730M (12GB) and A550M (8GB), all of which feature high-end ACM-G10 GPU.

It is further confirmed that Serpent Canyon will be the first NUC to feature DisplayPort 2.0, a new display connectivity technology that has only made a debut with desktop Arc A380 graphics by GUNNIR. Unfortunately there are still no DP2.0 displays available on the market. Similarly to GUNNIR card, this NUC 12 also appears to be limited to HDMI 2.0b, which is unfortunate, considering there are many HDMI 2.1 monitors and TV already available. 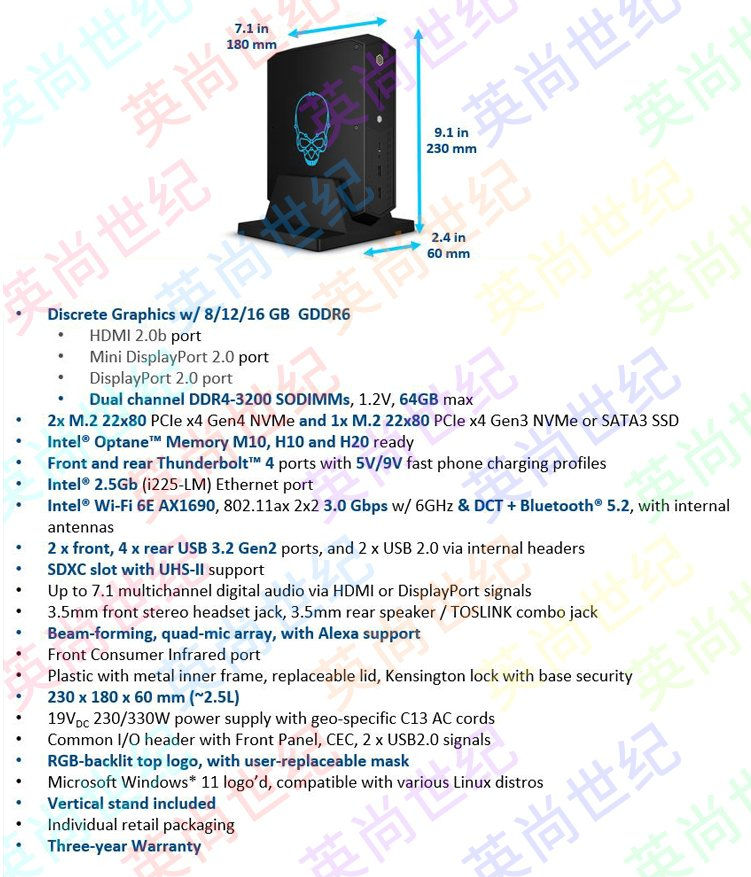 NUC 12 Enthusiast will also use DDR4 memory technology rather than DDR5, although Alder Lake already supports this standard. The device is compatible with up to two SODIMM modules rated up to 3200 MT/s. According to this specsheet 64GB capacity is supported.

It is also worth noting that NUC 12 Enthusiast will also feature Intel’s AX1690 WiFi-6E network card. Those are based on the latest AX411 NICs, which were released late last year, but have somehow not made their way into the mainstream notebook platforms just yet. However, one can find them in select high-end gaming notebooks.

Intel has not yet confirmed the release date for its NUC 12 Enthusiast PCs, but one might guess the launch will be heavily correlated with Arc 7/5 series availability.