Weibo user (从未完美过) published the first details on the next-generation Intel Next Unit of Computing (NUC).

Intel NUC platform now spans across laptops and Mini-PCs, offering entry-level up to high-end gaming performance. Recently, Intel announced that its NUC 11 Extreme which was announced earlier this year, is now available in stores. It offers Intel Tiger Lake KB series processors and support for full-size discrete GPU. This GPU enclosure with NUC Element board is far from a small configuration, hence it cannot be called ‘mini’, but Intel also offers smaller machines, such as its Enhthusiast line.

The next generation codenamed NUC 12 will most likely feature the Intel Alder Lake processor series and possibly the upcoming DG2 GPUs. The first photo and specs have been shared on the Chinese social media platform Weibo.

According to the specs, the NUC 12 Enthusiast would be offered in three configurations: Core i7 + Discrete Graphics 16GB, Core i5 with 12GB GPU, and Core i5 with 8GB GPU. While the graphics cards are not named, those memory configurations would match the rumored Intel Xe-HPG based DG2 family of GPUs, Intel’s upcoming discrete GPUs for gaming. 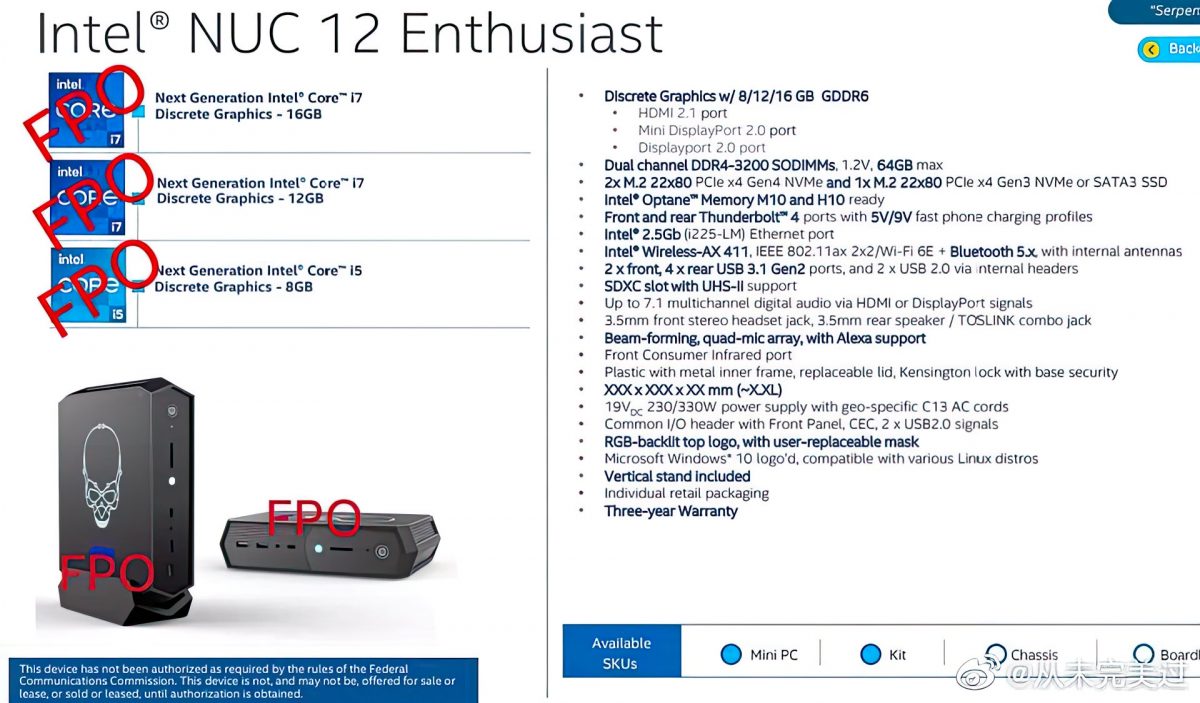 The NUC 12 would also be equipped with DDR4-3200 memory, confirming that the 12th Gen series will support both the DDR5 and DDR4 memory technology. The device would only support PCIe Gen4 standard for two NVMe drives and a single PCIe Gen4 drive. It would be equipped with Thunderbolt 4, 2.5Gbit Ethernet, and WiFi6E compatible network solution (Intel new AX411).

The listing is clearly not final and there are many details missing, such as processor and graphics SKU names, but according to the slide, Intel DG2 would support both the HDMI 2.1 and DisplayPort 2.0. The latter is not currently supported by NVIDIA Ampere and AMD RDNA2 GPUs.

The NUC 12 Enthusiast requires a 19V 230/330W power supply. The power adapter will mostly depend on the discrete GPU option.