Intel has not given up on a third Arc GPU, it seems. Open source Intel Graphics Compiler received a patch specifically for the third yet unreleased Arc GPU.

Last week, Intel officially confirmed two Arc Alchemist processors: ACM-G10 and ACM-G11, those are new (and completely unnecessary) names for the DG2 GPU series. In fact, Intel Arc Alchemist GPUs now goes by a number of names right now, such as DG2-G10, SOC1 or DG2-512. The former, which appears to be a hybrid between internal and public GPU name, is used by Intel in their Linux software development.

Following a report from mid-March, Intel might still be planning a third SKU, the DG2 256. Such a name appeared in Intel Graphics Compiler for OpenCL and Ubuntu operating system in a patch released on the same day Arc Alchemist was announced for laptops. Interestingly, though, only two A-Series GPUs were shown on that day, either confirming that there is no third GPU or only those are used by the mobile series.

Clearly, Intel is still doing development around a third variant known as DG2 256 or ACM-G12, which either suggests this is a desktop GPU (the specs were not yet confirmed by Intel) or possibly a workstation processor which are expected in a third quarter. 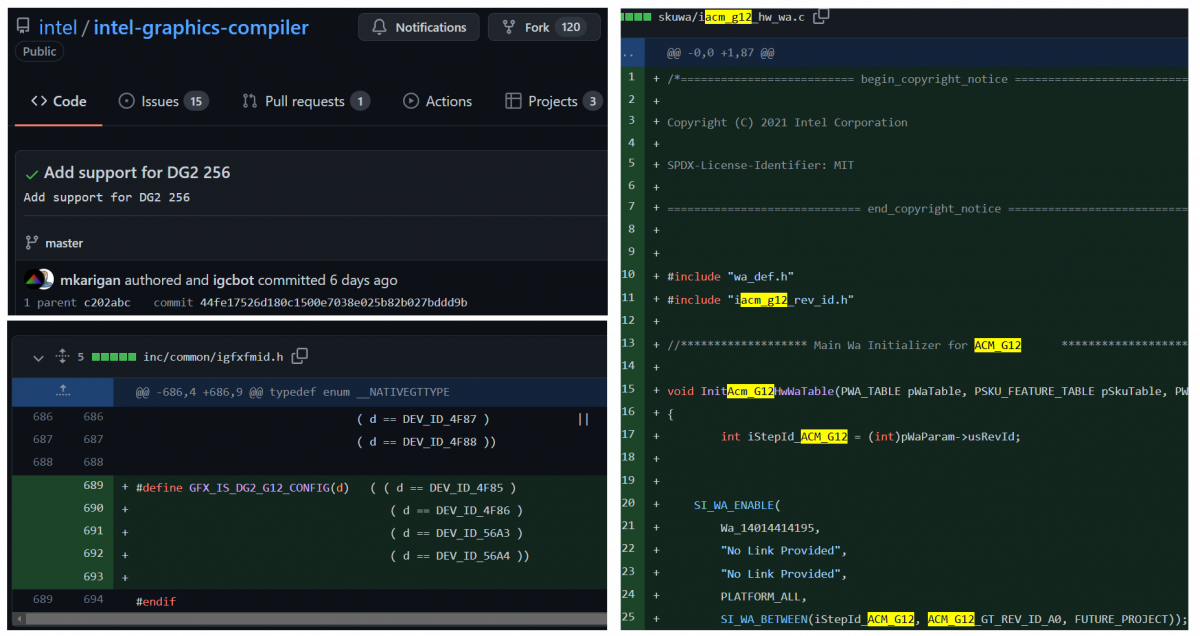 The IGC entries mentions both the DG2-256 and ACM-G12 code names. The former basically confirms it’s a 256 Execution Unit GPU (also known as Xe Vector Engines). This means 8 Xe-Cores and 2048 FP32 cores, exactly half of the flagship ACM-G10 GPU.

What is not confirmed yet is the memory bus specs, the GPU could either feature 128-bit wide controllers or 192-bit. It is not quite clear why Intel omitted this GPU during its Arc A-Series GPU presentation, but one could assume that this part is simply launching later. The public software development for SOC3 has clearly started just a few weeks ago.