Intel lists “Arc A3 for desktop” series, then removes it

Intel Arc A3 for desktop

Something is finally happening.

You might have thought that Intel forgot to launch its Arc discrete GPUs for desktops, but that statement couldn’t be further from the truth. The company is slowly approaching its deadline to introduce desktop cards in Q2 2022, which means there is just one month left.

Intel recently confirmed that Arc will be China OEM exclusive at launch. The company intends to introduce Arc A3 graphics cards first through system builders and OEMs, then followed by retail market shortly after, but this launch is limited to the Chinese market. The company is then expected to launch Arc A5 and A7 series ‘later this summer’, but it is clear that a low-end ACM-G11 GPU is taking a priority.

Yesterday, on Intel website one could find a link to Arc A3 series for desktop. This link actually did not work, and then it has already been removed, however its appearance is a clear sign that A3 series are finally coming soon. 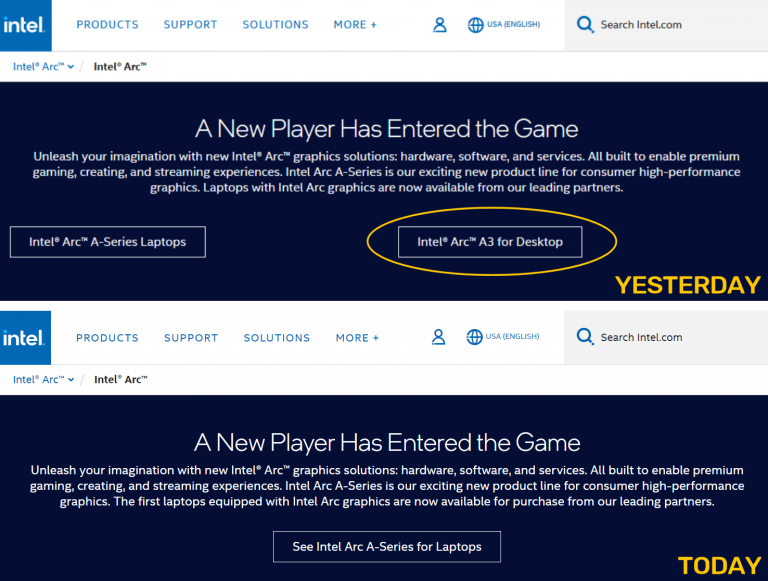 Intel A3 models that were already confirmed include A380 and A310 SKUs, with rumors suggesting that A380 could launch first. This part is likely to feature the full ACM-G11 GPU with 8 Xe-Cores. It might also be the first part based on this GPU to utilize a 96-bit memory bus (mobile SKUs are limited to 64-bit).