A leaked slide from an unknown source indicates that the upcoming I225 2.5 Gbe controllers may face issues related to inter-packet gap variance.

According to HardwareLuxx, who quote motherboard manufacturers, Intel has resolved this issue and upcoming Z490 motherboards will already feature the hardware fix for Intel I225 controllers (V2).

The slide refers to Intel Foxville, which is a codename for Intel I225 Ethernet controllers. Two I225 products are listed on the Intel ARK website. The I225-V controller expected to become mainstream thanks to the Z490 motherboard series.

According to the leaked slide, Foxville controllers have a variance in the inter-packet gap versus the IEEE 2.5 BASE-T standard. This results in packet loss and reduced throughput (Intel reports 1 to 10 Mb/s loss).

AMD OEMs already offers quite a few X570 motherboards with 2.5 GbE networking, but they rely on 3rd party chipsets. What could have become a feature of the Z490 platform, may end up problematic for Intel. The scope of the problem is still being evaluated by Intel as tests of 3rd party 2.5 GbE networking equipment is in progress.

The company expects a hardware stepping fix for Foxville around the second half of 2020. This would align with Rocket Lake-S production timeframe, Intel claims. 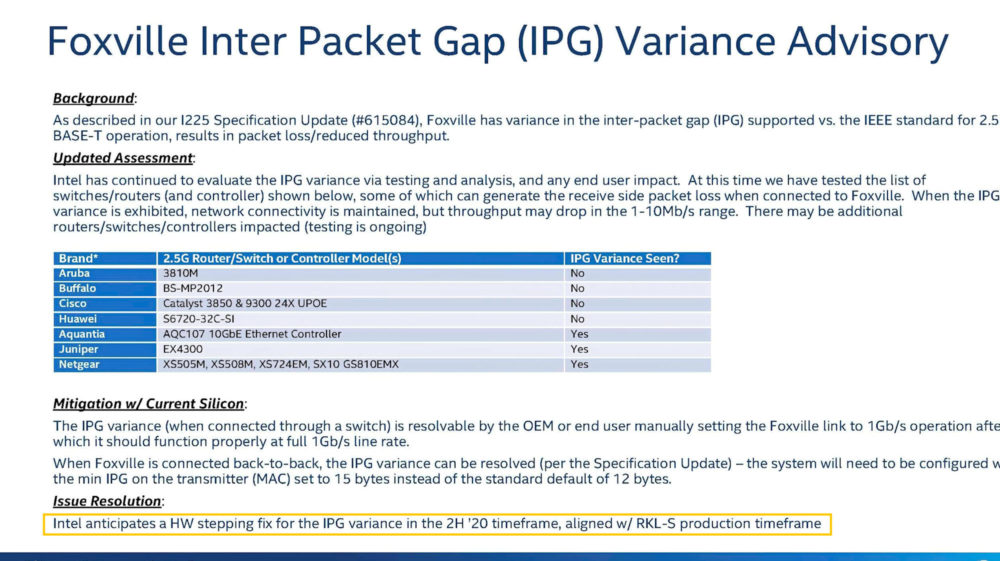