While Intel is still polishing Comet Lake-S series for launch, we can already see rumors and leaks about its successor — Rocket Lake-S — also expected to be Intel’s last 14nm architecture for desktops.  However, not much is known about these series. They are believed to be the last featuring Skylake microarchitecture.

Intel Rocket Lake-S is rumored to launch next year, but there are rumors that it might even launch later this year. Without a doubt, 2020 will be a very interesting year for CPU enthusiasts. AMD already promised to deliver news on Zen3, but on the other hand, Intel has never confirmed the Rocket Lake-S series. Well, at least we will be hearing more about Tiger Lake with Xe Graphics.

Intel B460 for Comet Lake-S

Meanwhile, Comet Lake-S CPUs such as Core i9-10900 are making an appearance in the SiSoft database. This particular processor is the non-K version (so it’s “locked”) with 10 cores and 20 threads. According to the entry, it will carry a base clock of 2.8 GHz.

Alongside the new CPU, Medion’s B460H6-EM motherboard can also be found. Medion is an OEM, which means this is probably a full pre-built system and this particular motherboard will never go on sale separately. 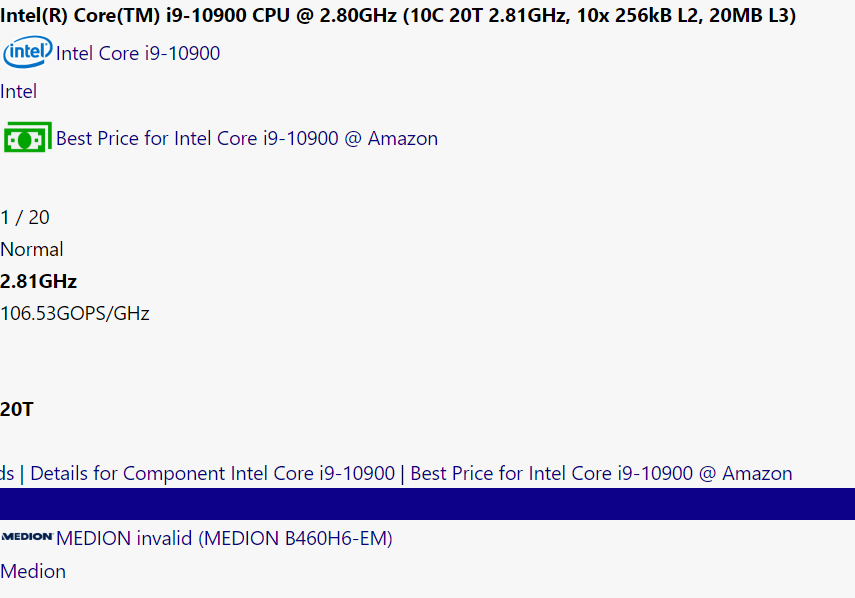