Intel has not been eager to reveal all power limit details at the launch, even reviewers were not told the full story. However, the information has finally been provided to ComputerBase. The new data confirm exactly what was expected: Comet Lake-S PL power values are much different from the previous series.

As you know official TDP values have pretty much nothing in common with actual power consumption for the Intel processors. The CPUs will operate at higher power targets which are defined by PL1, PL2 and Tau values (that’s assuming PL3 and PL4 are disabled and in most cases they are). If you wish to learn more about those values, check our previous post where we explained them in greater detail.

Intel has confirmed that it is possible to enforce a 3.5 higher power limit (in PL2 state) for certain Comet Lake-S processors over official TDP figures. This value was usually 1.25 times higher than TDP (at least for previous generations), so a much greater multiplier is certainly noticeable. The 3.5x higher PL2 (123W) over TDP can be expected from a Core i9-10900T processor, which is a low power (35W) version of the 10-core silicon.

The regular 65W processors can have a PL adjusted up to 224W, which equals 3.45x higher power. A longer Tau value can also be seen for the K-series, but these are generally adjusted by motherboard makers.

The higher PL2 values and longer Tau can increase the state when Intel Comet Lake-S processors stay in the boost mode with higher frequency. In the end, this means higher clocks for a longer time.

Der8auer, an extreme overclocked from Germany, provided a short video explanation to power consumption and temperature behavior on thirty Intel Core i9-10900K processors. His video provides a very clear picture that not all processors are created equal, even from the same series, even the same SKU from the same manufacturer. Just because the CPU consumes more power, it does not mean it will run at a higher temperature. That said, the discrepancy between samples is to be expected.

His video also goes into detail on the processor overclocking under different temperature targets. Der8auer explains why overclocking at sub-zero temperatures does not always mean better frequencies (spoiler: because the CPU is mostly made of copper and at certain temperatures internal resistance increases). 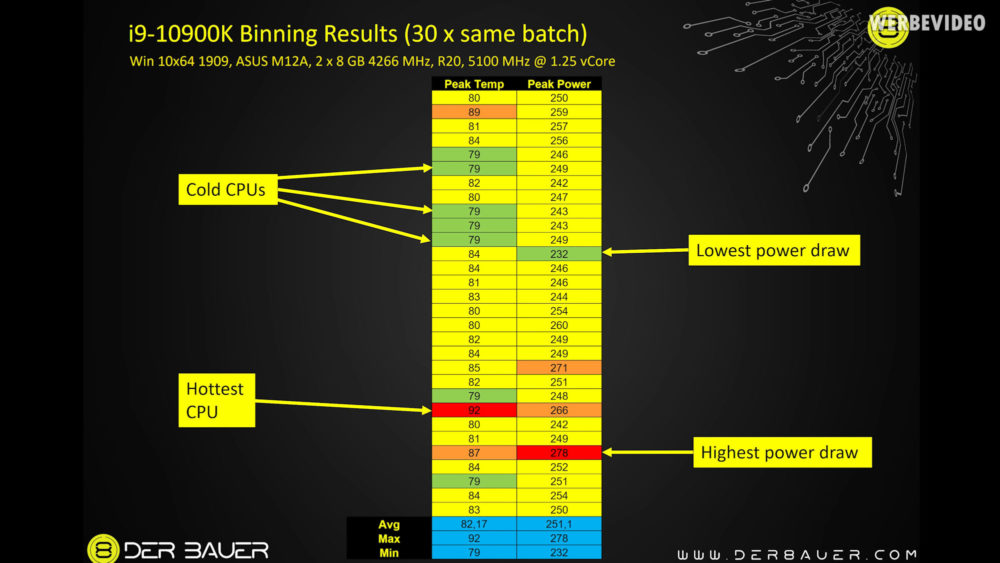