The upcoming 600 series motherboards will span across a very wide spectrum of platforms, including high-end desktops all the way down to mainstream series, a new leak directly from Intel appears to suggest. 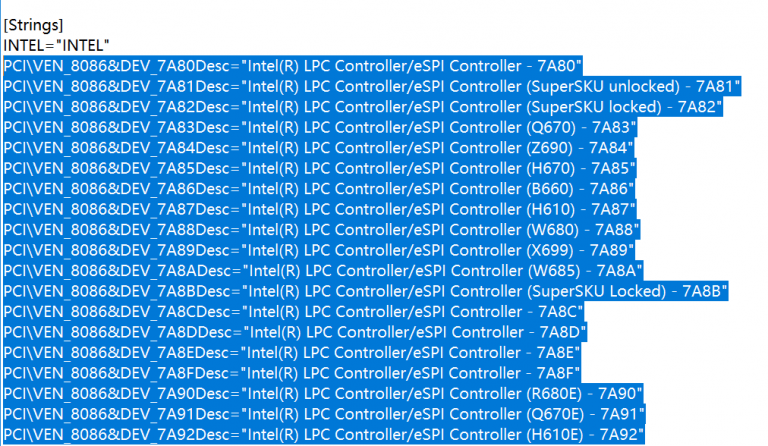 The full lineup that has leaked through the driver features:

While it is not quite clear what X699 stands for, one would assume that this might actually be Sapphire Rapids-X, although we have already seen this codename associated with W790 series. There might, however, be two series. One being for gamers and the other for workstations, similarly to AMD Threadripper and Threadripper PRO series. However, this is just speculation at this point.

We also see a large list of mid-range series such as H670, B660 and their business variants such as Q670. Those motherboards offer limited functionality or lack certain features that may not be always be needed or useful, such as high-speed networking, multiple PCIe slots, or overclocking capabilities.

The 600 series motherboards will be the first to feature an LGA1700 socket and DDR5-4800 memory support. Additionally, Intel just recently confirmed its new motherboard series will also be the first consumer product to feature PCI Gen5, a feature that is not expected from next-gen AM5 motherboards for the Zen4-based Ryzen series. However, the requirement of PCIe Gen5 from the next-gen motherboard series does not appear to be that important, as there are no NVMe drives and GPUs supporting this standard.

Twitter leaker Komachi claims that Intel Management Engine version 17 will be compatible with Raptor Lake (RPL) series, while version 18 should support the Meteor Lake-M series (mobile). This would reaffirm the expectations that Meteor Lake would succeed Raptor Lake as the 14th Gen Core series. At this point, however, it is not clear if Meteor Lake will share the same platform as Alder/Raptor Lake series featuring the LGA1700 socket.