The leaker has revealed that Intel is also working on a DG2 variant with 448 Execution Units, that’s aside from 512 EU and 384 EU SKUs. The DG2-448EU has not been mentioned in any other leak so far, including leaked documents that listed all mobile variants. Thus, the SKU that is being tested and was spotted by APISAK is likely at a very early stage of development. However, it shouldn’t be surprising to see a cut-down DG2-512 GPU being used under a different SKU, although this would extend the list of all known variants to 6.

The 448EU model clocked at 1.8 GHz is falling behind GeForce RTX 3070 desktop GPU by 5%, according to APISAK. The leaker is careful not to reveal the source of this information, thus is it unclear what benchmark is he using for the comparison. At the same time, APISAK mentions a 128EU model clocked at 1.9 GHz which is 12% faster than GeForce GTX 1650, again not mentioning what type of workload is being used. It is not clear if this is a desktop or mobile variant either, but since the leaker is comparing the results to desktop GPUs, one would assume that this is a desktop GPU.

Earlier this month Raja Koduri unveiled the DG2-512EU GPU, confirming all the rumors that such as GPU exists. This is the top variant from the upcoming Xe-HPG (gaming-oriented) series. The top SKU is expected to feature up to 16GB of GDDR6 memory. Intel will also launch DG2-384 and DG2-128 GPUs based on the same architecture. Judging from the rumors, the 512EU SKU is probably coming out this later year, with other variants slipping to the first quarter of 2022. 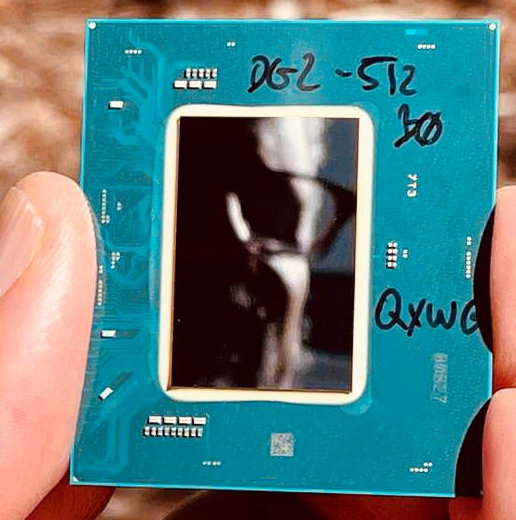 A prominent Intel DG2 leaker, Moore’s  Law is Dead, who shared photos of an early engineering sample of the discrete desktop DG2-512EU graphics card, claims that this SKU should perform just below RTX 3080 desktop model. The current performance should therefore be similar to the just-released GeForce RTX 3070 Ti.  This claim in combination with what APISAK just revealed would put DG2-512EU GPU in a fight against NVIDIA GA104 GPU, which similarly to DG2-512 is also the top mobile GPU. It would appear that we should not expect Intel to compete with NVIDIA GA102 or AMD Navi 21 GPUs until at least the DG3 series.