Intel DG2 has been listed with 8GB GDDR6 memory on a specs sheet for an unspecified device. The product is possibly a high-end mobile device, likely a gaming notebook coming to the market next year.

The product would be paired with yet unannounced Tiger Lake-H series, which we covered just yesterday. The series will be Intel’s first 8-core high-end mobile series (45W) with Willow Cove’s core design.

Optionally the product would also be offered with Intel Alder Lake-P. Based on our knowledge this product will launch at the end of 2021 and it will also feature Alder Lake-H and Alder Lake-U series. Unlike the Tiger Lake-H series, however, the Alder Lake will feature brand new hybrid architecture with big and small cores. The first wave is to be expected with 2 small and 8 big cores. The 6+8 variant is to be released later, sources told VideoCardz.

The 8GB variant of DG2 is possibly the 512 EU variant also featuring a 256-bit memory interface.

As we have mentioned in a previous story, the DG2 will launch in at least three variants: 384, 512, and possibly even 960 EU. The EU stands for the Execution Unit and each has eight ALUs (cores). That said, the possible Xe-HPG core configurations are 3072, 4096, and 7680 cores. Those are, of course, full dies, not actual SKUs.

A PCB diagram of the DG2 384EU variant has been sent to us recently. It features a die size of around 189 mm2. The PCB looks densely populated with components and it may actually be an MXM discrete variant for notebooks.

This model of DG2 has 6 GDDR6 memory modules, indicating a 192-bit memory interface. 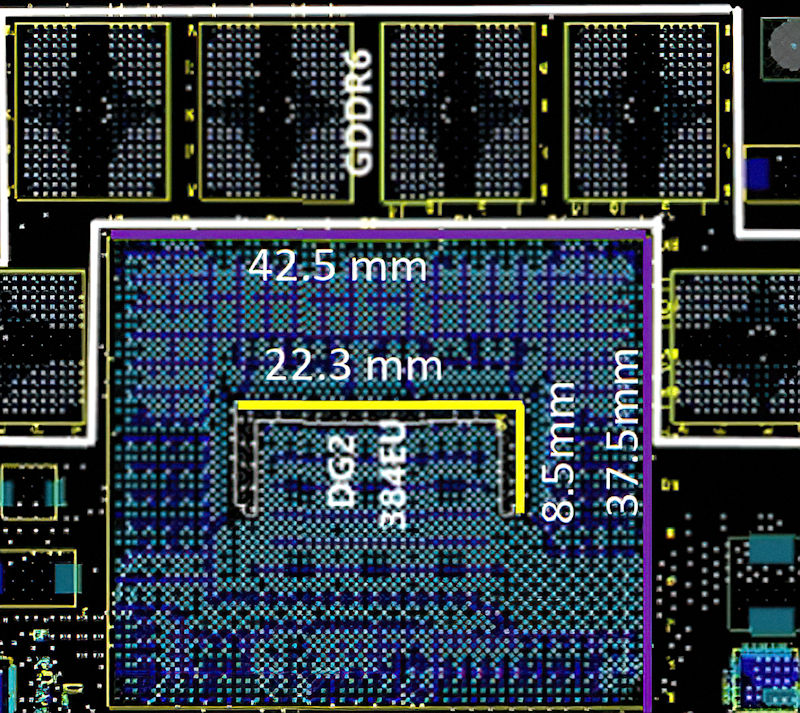 What is also interesting is that the DG2 could also feature a USB Type-C connector. It is important to note that the DG2 series are, as mentioned above, coming to notebooks. The most recent Intel laptops are now all equipped with a Thunderbolt 4 connector, which can also act as a display connector, thus the entry could refer to this connector.

AMD revealed yesterday that its high-end Big Navi design will also feature a USB Type-C connector, whereas NVIDIA has not adopted the USB Type-C (Virtual Link) for its GeForce RTX 30 series.