At the Innovation 2022 event, the company confirmed the specs of the 13th Gen Core series, with support for DDR5-5600 memory out of the box. However, modern desktop CPUs can benefit from memory overclocking through the use of Intel Extreme Memory Profiles (XMP) 3.0 or AMD Extended Profiles for Memory Overclocking (EXPO).

Intel has a list of XMP 3.0 compatible setups. This is a list from memory makers with their ‘self certifications’ for specific CPU, motherboard and memory models. This certification list has already been updated with 13th Gen Core series where one can learn that the flagship CPU, i9-13900K will, in fact, work with DDR5-7600 memory.

The fastest confirmed XMP profiles are for G.Skill memory on ASUS Z790 ROG Maximus Hero and Apex boards. Memory such as DDR5-7466 or DDR5-7600 is now confirmed to work with 1.4 Voltage and CAS latency of 36.

It should be noted that the fastest currently sold G.Skill DDR5 kit (Trident Z5 RGB) has 6600 MT/s speed. The kits mentioned above are not yet on sale. Furthermore, the fastest memory is supported on the rather expensive boards, mainly the ROG Maximum series, but also AORUS Tachyon from Gigabyte. However, one can also find ROG Strix-F or MSI MPG Carbon certified for 7200 MT/s. 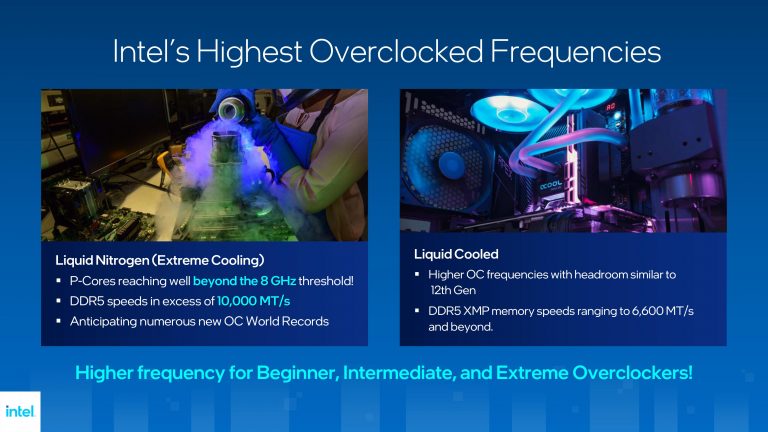 Intel has been teasing support for faster memory at Innovation event ‘ranging to 6,660 MT/s and beyond’. The company also confirmed that overclockers can achieve even greater speeds, exceeding 10,000 MT/s, but that is probably unreachable for most Raptor Lake users. The high-speed 7200+ DDR5 memory is not yet on sale, but these certifications may suggest that this might change soon.

Many thanks to Blck for the tip!