Intel might still need a few days to announce its 13th Gen Core series, but the performance data is already out there.

Intel had officially confirmed the i9-13900K processor last week when the product page went live ahead of the announcement. This slip of the tongue from Intel confirmed that the CPU has 24 cores and will boost up to 5.4 GHz with its boost technology. As we know, this SKU will obviously boost much higher (up to 5.8 GHz) thanks to Thermal Velocity Boost technology that is exclusively available with Core i9 series.

This huge frequency increase for 13th Gen Core series is already proving itself in leaked benchmarks. One such benchmark is PassMark, which is now listing i9-13900K data based on four test samples. The CPU scored 4833 points which is 9.5% higher than the fastest Alder Lake CPU. 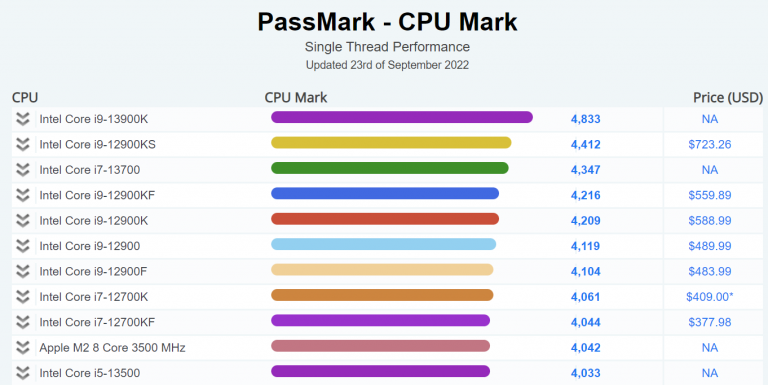 The CPU also scores 54433 points in multi-threaded test, which is around 18.7% faster than Ryzen 9 5950X in the same ranking. Unfortunately, there is still no sign of AMD Ryzen 7000 series in PassMark charts, which is somewhat interesting, considering that AMD CPUs are to launch a month sooner. 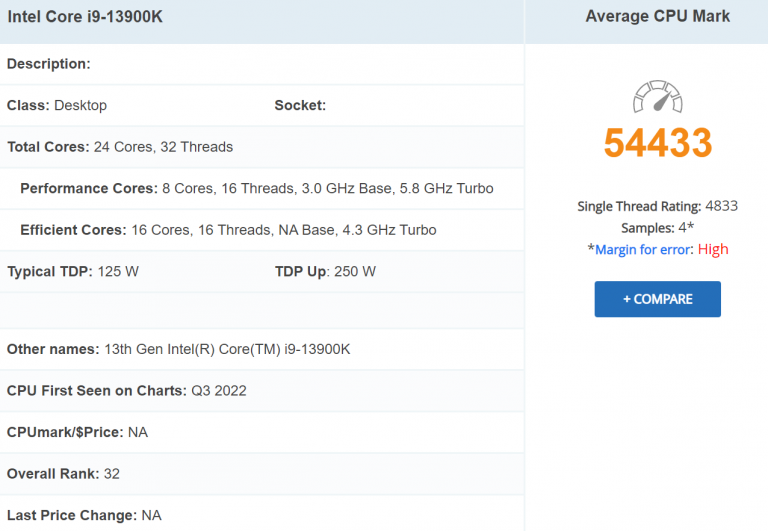 As shown above, Core i9-13900K is not the only Raptor Lake CPU listed by PassMark. The data for i7-13700 non-K, Core i5-13500 or i5-13400 is also available. However, neither of these CPUs has enough sample rate to be considered accurate. Of course, we eagerly await AMD’s Raphael debut in this ranking, which hopefully happens in the next few days.