The Core i9 processor reappears after nearly two months.

The Core i9-13900HK is the upcoming flagship mobile processor from Raptor Lake series. The processor has again been tested with Geekbench software, apparently with the same Samsung system as before.

The higher clock may be the key advantage of this processor. The 13900HK does not appear to have bigger L2 cache like desktop Raptor Lake parts, meaning we might be looking at a refreshed Alder Lake-P silicon. However, it may be to too early to tell. 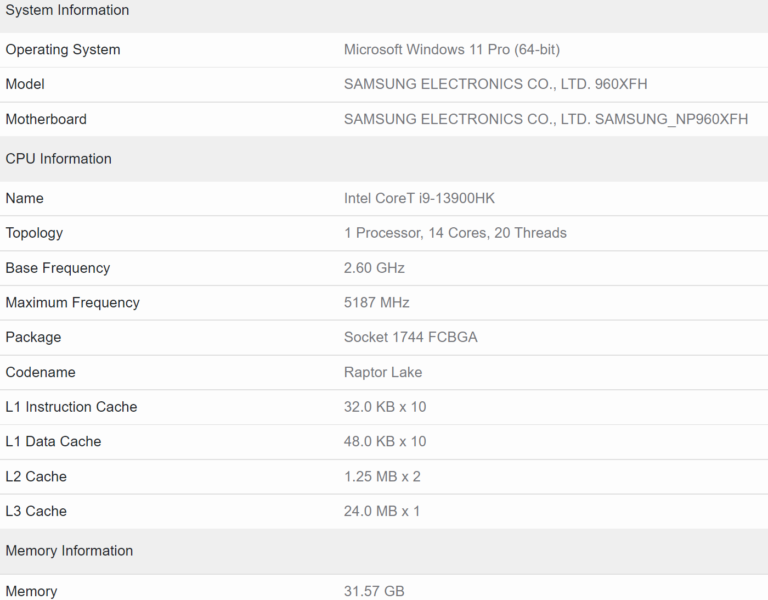 The processor scored 1870 points in single-core Geekbench V5 test. This is 3% higher than the last time. The multi-core score has also increased by 5% (12436 points). This is still not enough to outperform the top 12th Gen Core parts, in this case the HK and HX variants.

Unfortunately, none of the 12th Gen Core “Alder Lake-H” processors are now listed by Geekbench in official ranking. We went through the trouble of collecting data ourselves, and the results are presented below. Since almost the entire high-end Intel mobile lineup features 14 cores or more, the scores are very similar, almost to the point where the difference is within the margin of error.

A proper Raptor Lake die will eventually make its way to the laptop series as well, possibly with all 16 Efficient cores enabled. That would no doubt visibly increase the multi-core performance. For now, however, there seeems to be a minimal difference between 13th Gen and 12th Gen H-series CPUs.