Geekbench, everyone’s favorite leak-bench, now lists Core i9-13900 non-K CPU, one of the first 65W models from the upcoming series.

Intel Core i9-13900 features the exact same CPU configuration as the K-variant. This means full silicon with 8 Performance (Raptor Cove) cores and two clusters of Efficient Cores (Gracemont) with 8 cores each. In total, this SKU features 24 cores and 32 threads, which is Intel’s highest core count ever for a consumer CPU.

Unlike the i9-13900K, which has a nominal TDP of 125W, the non-K variant is just 65W out of the box. It will probably be relatively easy to overclock this CPU by unlocking power limits; however, this is most likely not the point of this CPU anyway.

Over at Geekbench there is a first benchmark result featuring this CPU, which supposedly boosted up to 5.57 GHz according to the detailed output. The CPU has been tested on Gigabyte Z690 Gaming X motherboard supporting 32 GB of DDR5 memory. 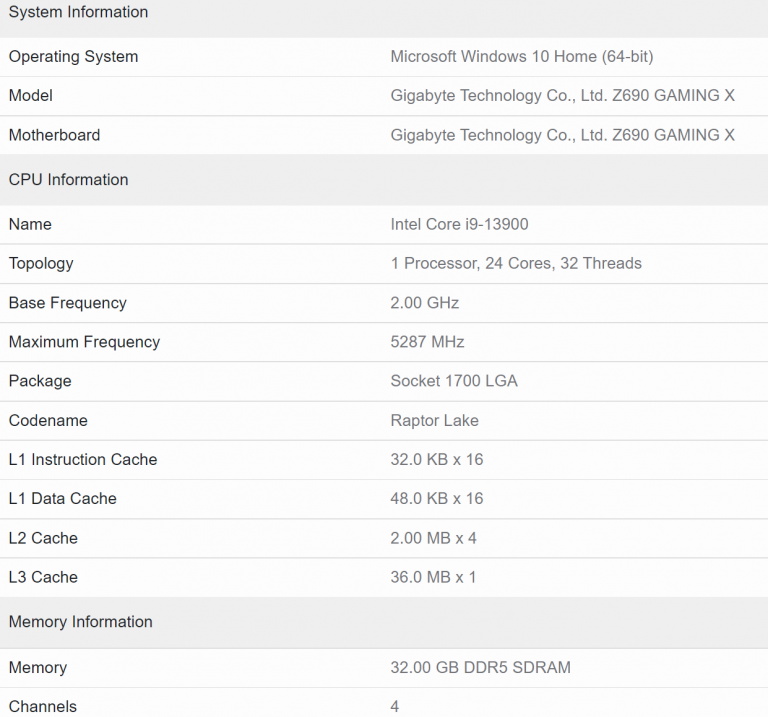 The CPU scores 2130 points in single-core test, and 20131 in multicore. This is actually a fantastic result, outperforming most of the current high-end CPUs from Intel and AMD.

More importantly and not surprisingly, it is also faster than the predecessor: i9-12900 non-K featuring 16 cores and 24 threads. Unfortunately, Geekbench does not have official ranking for i9-12900 non-K.

For this reason, we collected similar scores featuring i9-12900/Gigabyte Z690 configured systems and calculated the average by ourselves (do note that those are a bit higher than typical OEM systems with non-K series). Still, Raptor Lake is 10% faster in single-core and 21% faster in multicore test compared to Alder Lake i9-12900 non-K CPU.