With the announcement of 12th Gen Core, Alder Lake CPUs Intel said farewell to the traditional nomenclature describing processor power, namely Thermal Design Power (TDP). This value, typically referred to as PL1 (Power Limit 1) has now been renamed to Processor Base Power (PBP). Intel CPUs have been known to notoriously go beyond advertised TDP, which was often caused by the extended duration (Tau) of PL2 (Power Limit 2) by motherboard vendors, to the point where they become overclocking and marketing features.

Intel is now moving away from TDP nomenclature in favor of PBP and Maximum Turbo Power (MTP), previously referred to as PL2. Which is now being used by Intel in marketing slides, including official performance metrics. With all that in mind, reviewers will have to ensure to use the correct mode when comparing with competing solutions to avoid comparing CPUs in different power modes. This could skew the results in favor of more power-hungry CPUs.

Detailed performance metrics are still under an embargo, which is why we can only find not-so-accurate official performance charts compiled before Microsoft and AMD released an L3 latency fix for Ryzen CPUs on Windows 11 operating system. Luckily for us, Wofstame, who is Lenovo China Gaming Desktop Product Planning Manager, mistakenly posted a chart featuring a comparison of Alder Lake CPUs in PL1 and PL2 modes in Cinebench R20 multi-thread benchmark. This demonstrates how much more performance would Maximum Turbo Power mode give to each of the three new 12th Gen Core K-series CPUs. 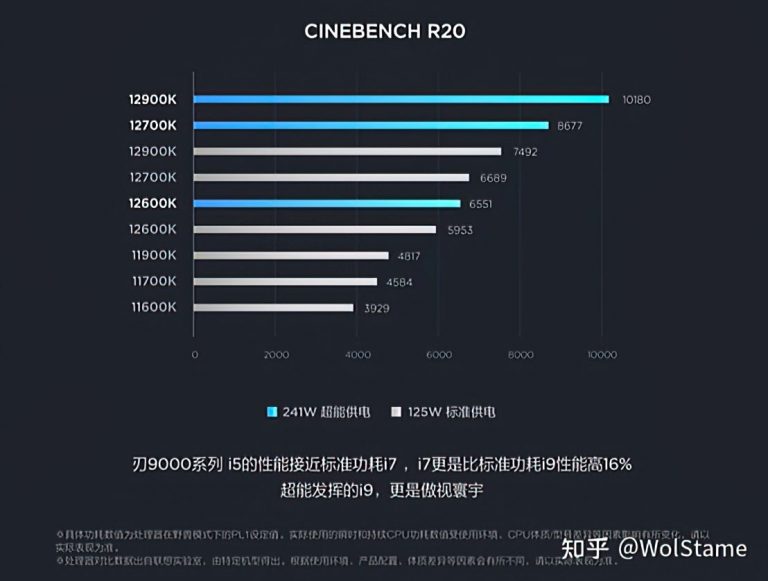 Intel Alder Lake-S CPUs are now to launch on November 4th. Retailers have already begun taking preorders and reviewers are finishing their tests which should go live at the same time as sales. This, however, has not prevented even the US biggest retailers from shipping the CPUs early to customers, who are now forced to wait for their Z690 motherboard to arrive.

Source: Wolfstame (Weibo) (chart has been removed from the source) via @9550pro