A new benchmark result featuring Intel Core i9-12900K processor has been spotted on the Geekbench website.

According to the data, the processor which features 8 Performance Cores and 8 Efficient Cores has been tested on Windows 11 Pro system, suggesting that the hardware and software take full advantage of Intel’s new Thread Director technology. This is the flagship model from the upcoming 12th Gen Core series offering a total of 16 cores and 24 threads (Efficient Cores do not support hyperthreading).

This heterogeneous architecture will take advantage of the latest DDR5 memory, but Intel will still be providing support for DDR4 Alder Lake systems to prevent unnecessary upgrade costs for potential customers. The Core i9-12900K that was tested in this case was using a DDR5 memory likely set to 4800 MT/s as the timings appear to match JEDEC specs.

The processor has reportedly a base clock of 3.2 GHz while the boost clock is not read correctly (displayed as 3 MHz on the result page and 29 GHz on the score’s detailed page). According to the rumors, Core i9-12900K should offer a 5.3 GHz boost clock on P-Cores and 3.9 GHz on E-Cores. The CPU was tested on Intel’s reference and validation platform for testing. 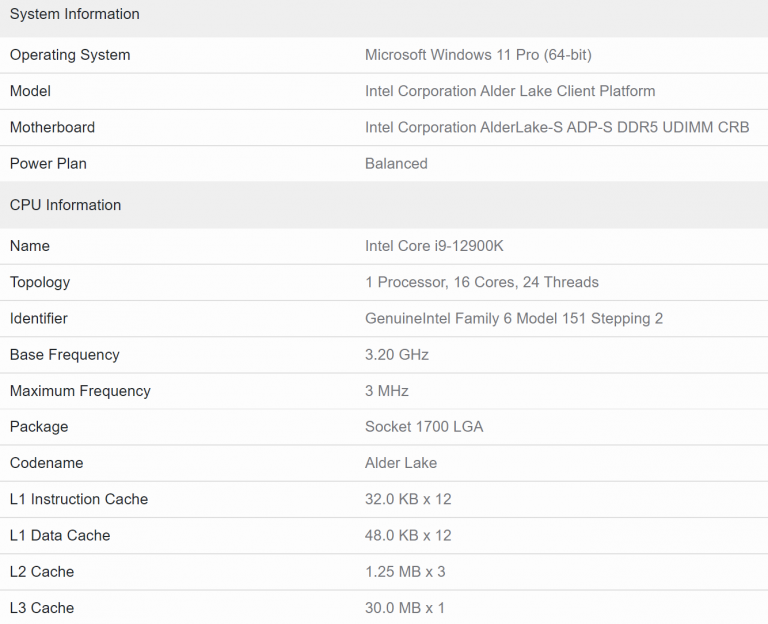 The Core i9-12900K scored 1893 points in single-core Geekbench 5 benchmark and 17299 points in multi-core. This means that the processor is actually faster than AMD’s Ryzen 9 5950X flagship in both tests by 12% and 3% respectively. At the same time the CPU is faster than the current Intel 11th Gen flagship, the Core i9-11900K by 2%  and 57% respectively, demonstrating Alder Lake’s huge performance uplift in multi-core operations.

This is how the leaked score stacks up against the official Geekbench V5 ranking:

So far only the specs of three K-series unlocked Alder Lake processors have been leaked. Yesterday there was a leak featuring Core i7-12700 non-K, however, neither the clocks nor the CPU configuration was fully confirmed.