A unnamed Lenovo gaming notebook equipped with 16-core Core i9-12900HX processor, the upcoming Alder Lake-HX chip based on the desktop BGA silicon, has been tested on Geekbench. This CPU will feature more cores and threads than the current flagship known as i9-12900HK which offers a 14-core and 20-thread configuration.

The processor was spotted with a base clock of 2.5 GHz and boost of 4.89 GHz, but it is likely that the CPU will boost to 5.0 GHz in its final form. After all, those results are still considered preliminary. 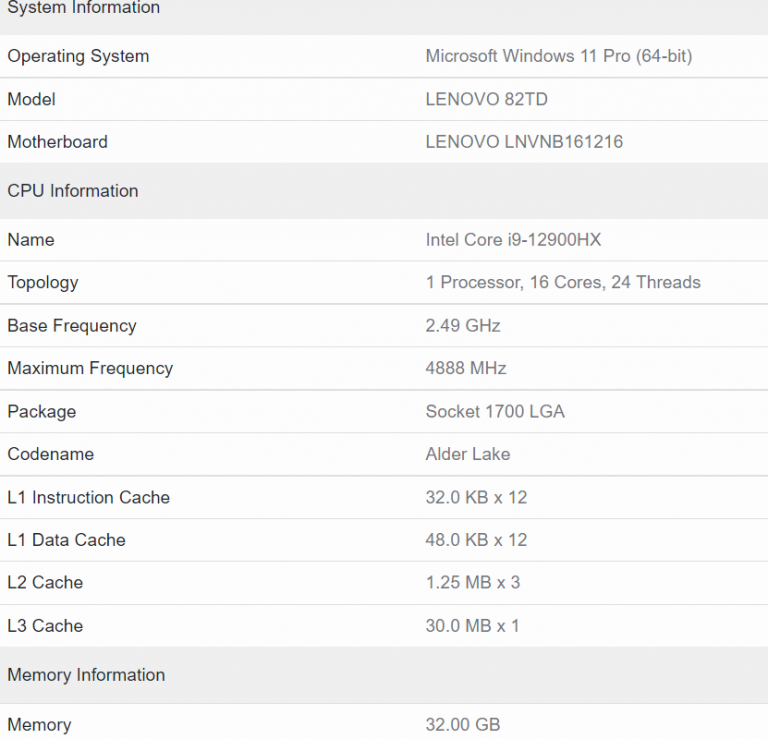 In terms of performance, the CPU scores 1921 points in Geekbench 5 single-core test 1921 in single-core and 15974 points in multicore. The i9-12900HK CPU is not yet included into official Geekbench benchmark charts, so the average score is not yet known, however a quick glance at the most recent results shows that i9-12900HK scores around 1800 and 14000 points respectively. That said, we are looking at (a rough estimate) 7% and 14% better performance.

At this moment, we only know about two Alder Lake-HX parts: 12900HX and 12650HX, both expected to have higher TDP (base power) of 55W. The CPUs based on desktop 16-core Alder Lake silicon will also have lower number of Xe-LP GPU cores (up to 32), but that shouldn’t be a problem considering those are targeted at high-end gaming systems.

Therefore, i9-12900HX appears nearly at the same time as the desktop i9-12900KS processor, a prebinned chip with increased clocks to 5.5 GHz. Intel certainly wants to take the performance crown in all fields, it seems.