Although Intel only announced its Alder Lake-H processors at CES 2022 earlier this week, the first laptops based on the newer Core series are not to be expected in stores till late January or even February. However, laptop makers have been eager to send their prototypes to influencers and reviewers who were only allowed to share the basic information.

Enter Lab501 who have a preproduction unit featuring a next-gen Alder Lake-H Core i9-12900HK processor. This is actually the flagship part with unlocked TDP, the only such part in the series. For this reason alone, it is also used by Intel in official benchmarks.

The Core i9-12900HK features 14 cores, 6 of them being Performance and 8 Efficient. Officially this part has a max turbo frequency of up to 5.0 GHz base power of 45W. According to Intel’s own estimates, it is up to 28% faster in gaming than the existing i9-11900HK based on Tiger Lake architecture.

As a side note, although the media does not refer to their test as ‘review’ but a ‘preview’, this might actually be the first professional and independent ‘test’ featuring a DDR5 based laptop. This unit comes with 32GB of DDR5-4800 CL40 memory and dual PCIe storage in Raid0. It is definitely one of the higher-end laptops that are coming, but sadly the site did not confirm which model specifically.

What is known is the fact that they do not have access to GPU drivers for the RTX 3080 Ti, which is also installed in this system. This means that they are unable to make a full review until such drivers are available. 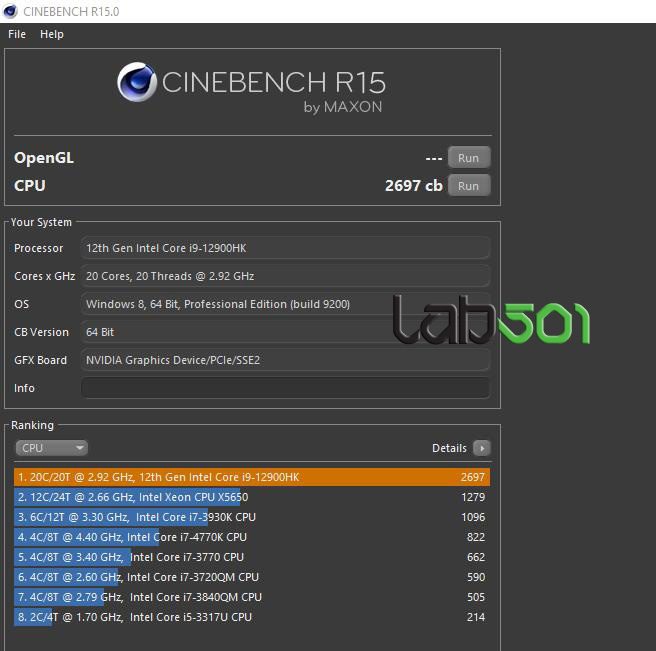 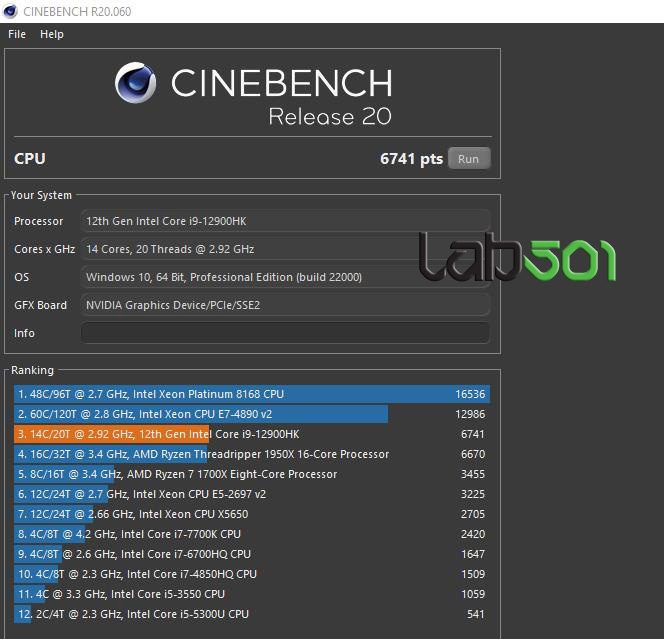 The processor tops the benchmark charts in all performed synthetic tests: we are looking at 15% higher performance in CInebench and around 8% better in PCMark 8. The site made a few more tests so make sure to check them out.

Lab501 notices that Core i9-12900HK is actually faster than stock Ryzen Threadripper 1950X in Cinebench R20. This claim resonates even more when we consider the fact that this HEDT desktop CPU is a 180W part.

We are yet to see leaks featuring AMD Ryzen 9 6980HX CPU based on 6nm Zen3+ architecture. Just like the Intel part, it is an unlocked SKU with a maximum turbo clock of 5.0 GHz, however, the part has fewer cores (8 vs 14), but at least all of them are ‘big’.

There is a reason why GPU testing, which was not part of this review, will be particularly interesting with Alder Lake CPUs. Intel Alder Lake-P silicon has PCIe GPU lanes limited to 8 (16 in total for GPU and storage). This could theoretically have an impact on GPU performance and it is something reviewers may want to focus on during their testing. This is especially interesting considering that 11th Gen Tiger Lake has full 16 lanes available (20 in total).

Intel Alder Lake-H laptops along with RTX 30 Ti GPUs are set to launch by the end of this month. Intel did not communicate any specific date.