We received a tip with a link to the CPU-Z validation page featuring Intel Core i9-11900K CPU. This is an 8-core and 16-thread processor based on Cypress Cove architecture that Intel will officially introduce next month. This is likely the last S-Series flagship CPU to be based on a 14nm fabrication node before the 10nm Enhanced SuperFin “Alder Lake” series arrives. Thus, it is definitely interesting to see how much performance can Intel still squeeze out of this node.

The test was performed on the latest CPU-Z (version 1.95) that officially supports Intel Rocket Lake-S CPUs, therefore it is believed that the readings from the software are correct. According to the result website, the CPU achieved a clock speed of 4.7 GHz on all cores. It is worth noting that according to leaked specs the CPU supports Thermal Velocity Boost technology with up to 4.8 GHz on all cores and 5.2 GHz on a signal-core. This engineering sample was likely running at stock settings. Update: @VampsLeaks (the author of the test) confirmed the CPU is running at stock settings.

The Intel Core i9-11900K was tested on the ASUS ROG Maximus XII Extreme motherboard, which is based on the Z490 chipset. The ‘2004’ firmware that this motherboard is using, fully supports the 11th Gen core series. The test system was equipped with 32GB of DDR4 memory clocked at 3200 MHz, which is the highest frequency Rocket Lake-S series support without an XMP overclocking profile. 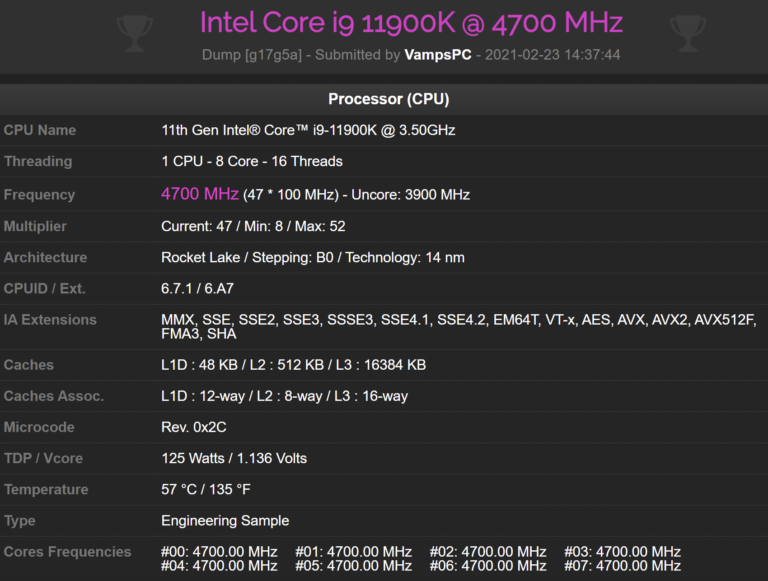 Under these settings, the CPU achieved 716 points in a single-threaded benchmark that is built-in into the software. It also scored 6539 points in the multi-threaded test. It is worth noting that we have already seen this CPU with ST scores above 700 points and MT at 7000, so this is not exactly a surprise. Although, the multi-threads score is below average from what it seems.

The official ranking does not list AMD Ryzen 5000 series, hence we have attached 3rd party results in the chart below.