Although Core i9-11900K results have been submitted to PassMark more than a week ago, only now the CPU has made its way to the ranking. The values presented by the software are based on a single benchmark, thus the margin of error is reportedly high.

The Core i9-11900K is a flagship 8-core and 16-thread CPU with a single-core boost up to 5.3 GHz thanks to Thermal Velocity Boost technology (exclusive to 11th Gen Core i9 series). The processor is based on Cypress Cove core architecture which is expected to bring a major efficiency per clock improvement over Comet Lake-S and other Skylake derivatives.

According to PassMark, the CPU scored 3,764 points in CPU Mark (single-thread performance), which is 7% faster than Ryzen 7 5800X based on Zen3 architecture. The latter is the fastest Ryzen CPU in the ranking. More importantly, there is nearly 19% improvement in single-threaded performance over Core i9-10900K CPU. In comparison to Core i7-11700K, also being 8-core Rocket Lake-S SKU but without Thermal Velocity Boost, the 11900K is only 6% faster. 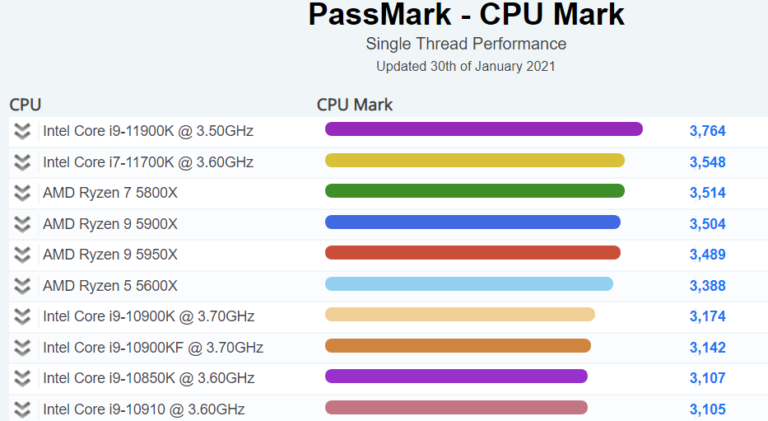 In comparison to the AMD Ryzen series, the i9-11900K is not as competitive in the multi-threaded benchmark. The CPU is still slower than Ryzen 7 5800X which scores 28703 points. 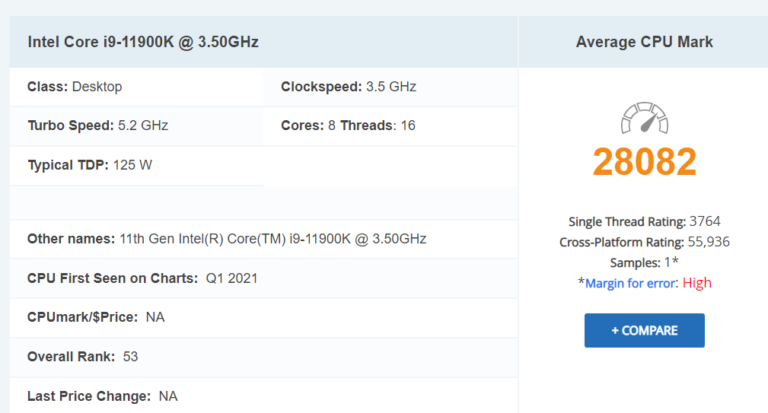 Intel is set to announce its 11th Gen Core Rocket Lake-S CPUs in March. The company has not confirmed when the CPUs will become available to consumers, nor it has been confirmed if the pricing will be adjusted accordingly to lower core count on the higher-end SKUs.

The i9-11900K will likely be the last flagship for the LGA1200 socket, the last DDR4/PCIe Gen4 platform before the manufacturer deploys its Alder Lake series offering a newer socket (LGA1700) and next-gen DDR5 and PCI Gen5 support.