All three K-Series processors from the upcoming Raptor Lake series have now been found in Geekbench benchmark database.

Over the past few days we have seen numerous leaks featuring Intel mid-range Core i5-13600K 14-core CPU. A week sooner we also had 24-core Core i9-13900K flagship Raptor Lake CPU leak. Today, there is the first score featuring high-end Core i7-13700K, a 16-core unlocked model. This leak supposedly comes from ExtremePlayer, who tested Core i9-13900K before. He claims that this is a Qualification Sample.

The processor has been tested with the same motherboard as 13600K engineering sample yesterday: ASRock Z690 Steel Legend, which is a DDR4 motherboard. According to the listing, this CPU has 16 cores and 24 threads, which means there are 8 Performance cores and 8 Efficient cores, and a total of 24 threads.

According to this entry, the CPU has been clocked at an average of 5.36 GHz. Based on the detailed information the CPU had a minimum clock of 5.289 GHz and maximum of 5.381 GHz. 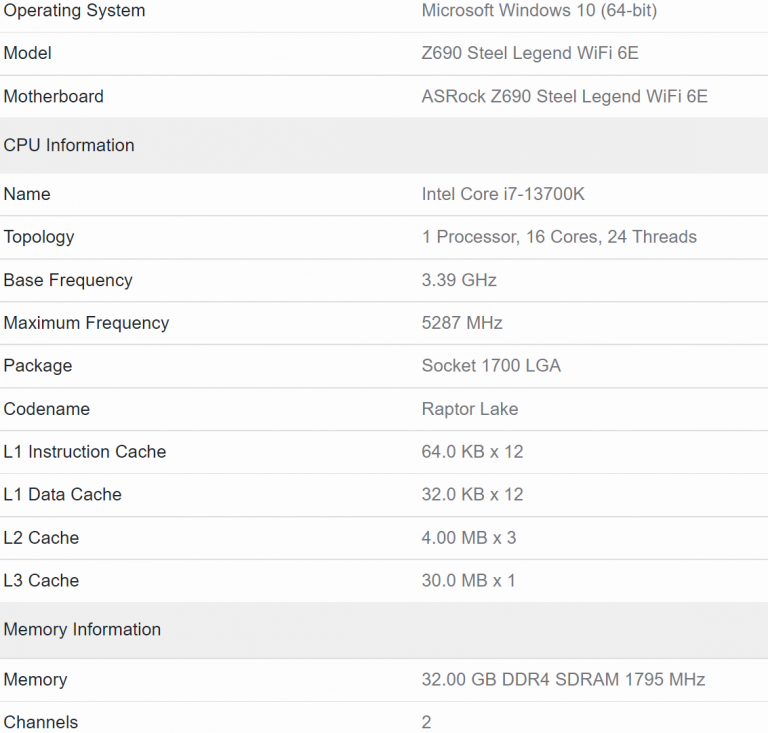 The CPU scored 2090 points in single-core test and 16542 points in multi-core. This is respectively 10% and 17% faster than its predecessor, the Core i7-12700K from Alder Lake series. One should note, however, that relatively high core frequency may suggest that this is an overclocked score. With such a score, Intel i7-13700K matches AMD’s flagship Ryzen 9 5950X CPU with nearly identical multi threaded score. The single-core score is a different story, here Raptor Lake leads by 24%.

Intel 13th Gen Core series are now rumored to launch in October with possible announcement around September. This means that all K-series CPUs from the Raptor Lake lineup have now been leaked weeks in advance.