Another Intel Core-HX SKU has been spotted over at Geekbench.

A new leak supposedly shows an Intel Core i7-13700HX processor equipped with 16 cores and 24 threads. This CPU’s base frequency is 2.1 GHz, while it boosts up to 4.96 GHz as per the software reading. According to the data, this CPU is part of the Raptor Lake series with L2 cache of 2 MB. For comparison, the Core i9-12900HX featuring the same core count has 1.25MB L2 cache. 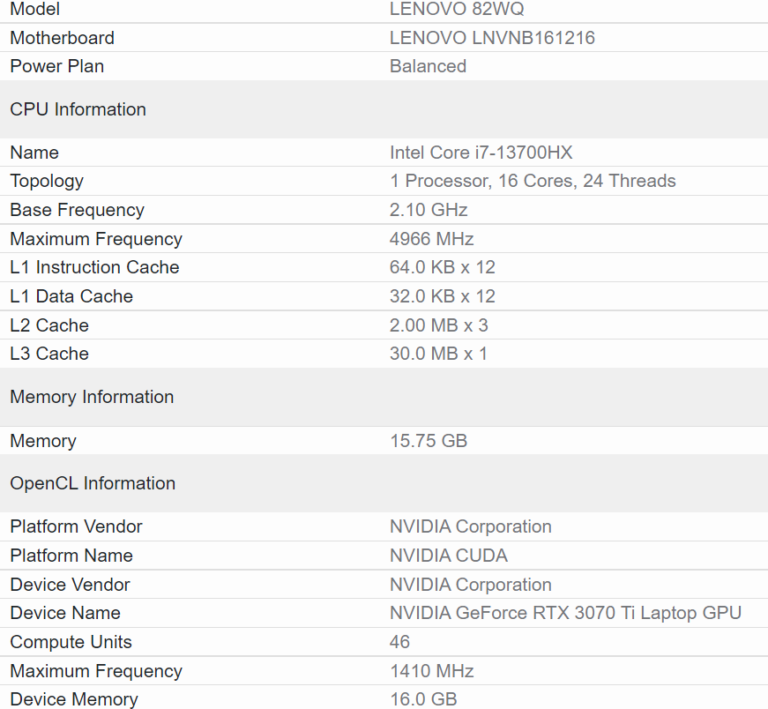 What is definitely interesting is the fact that this CPU was paired with NVIDIA GeForce RTX 3070 Ti. This is not an old SKU (it was released at the beginning of this year), but we really expected to see new series paired with GeForce 40 series at this point. We might get a replay from early 11th Gen Core series, where many laptops were released with GeForce RTX 20 series instead of 30. Those mobile systems were quickly succeeded by RTX 30 models.

When it comes to performance, this part has higher single-core and multi-core scores than Core i9-12950HX part (the flagship SKU with Intel vPRO of mobile Alder Lake series). It’s a small improvement for single-threaded speed at 2.8% and round 9% in multi-threaded.

It has been a while since we posted a full chart featuring all known 13th Gen Core mobile SKUs, so here is an updated one. As you can see, there are now six known Core H/HK/HX parts from the new series, which may not always feature Raptor Lake dies. Intel is expected to refresh at least some mid-range parts with Alder Lake silicon.

It wouldn’t be entirely correct to say that these are all Raptor Lake mobile CPUs, however, in the case of i7-13700HX, this part is indeed using a newer die with increased L2 cache.