A new Alder Lake-S processor had just made its first appearance on the Geekbench website.

A non-K series CPU called i7-12700 has just been tested in the Geekbench CPU test. The software had trouble reading out the information on the motherboard, but the CPUID string (Family 6 Model 151) appears to match Alder Lake CPU, which was correctly recognized by the software.

According to the leak, Intel Core i7-12700 non-K would offer 8 cores and 16 threads, a different configuration than the rumored i7-12700K CPU with 8 P-Cores, 4 E-Cores, and a total of 20 threads. This means that either the software is reading wrong values or Intel is now differentiating its K-series CPUs with higher specs.

The processor was reportedly running at 4789 MHz with a base clock at 2.1 GHz. An 8-core and 16-thread configuration suggests that Efficient Cores in this SKU are not enabled, so both clock speeds would be showing Performance Core frequencies. 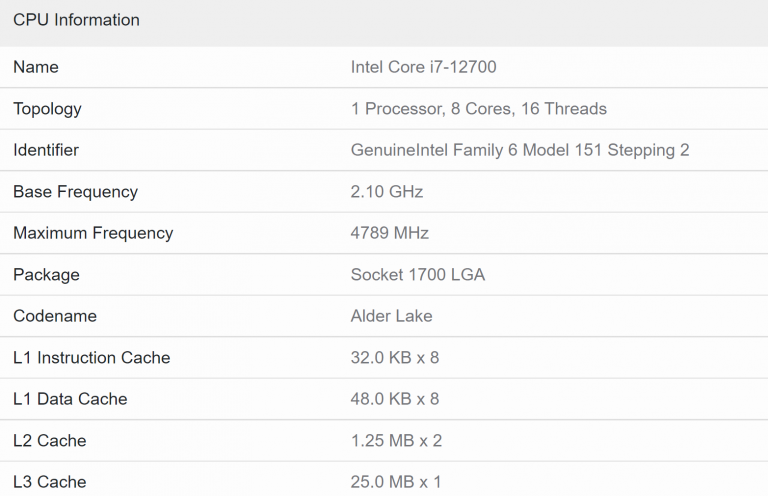 Despite offering a lower single-core result than its predecessor, the Core i7-11700 non-K, the multicore performance has increased by 15%. In comparison to Ryzen 7 5800X, the CPU is 5% slower in single-core benchmark and just 2% slower in multi-core.

The Core i7-12700 non-K would offer more Performance Cores than i5-12600K, but it would lack the benefits of Efficient Cores power savings, should the leak be proven true.